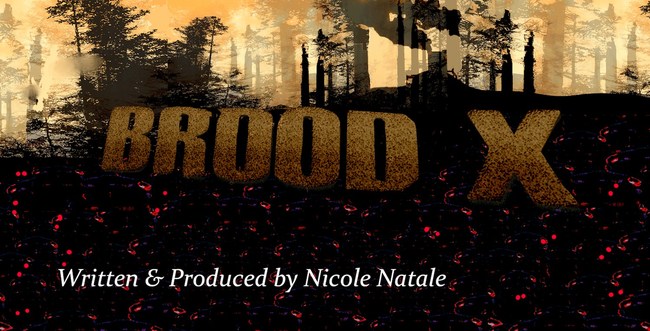 Author, director, and screenwriter Nicole Natale announced the online sale of her original film project, “Brood X,” a horror themed creature-feature. “Brood X” has been fully digitized and is offered as a newly minted NFT token recorded on the Ethereum blockchain. An extensive work of art, the “Brood X” NFT includes a completed movie screenplay; fully fleshed-out character descriptions; three outlined budgets for shooting the film on location in South Africa, Canada, and Arizona; a Private Placement Memorandum (PPM) for film investors; a richly illustrated and animated trailer with hand-drawn images; secret unlockable content for the final owner; and every other creative tool needed to launch the cinematic project. The full “Brood X” NFT token includes total ownership and fully syncs to the OpenSea.io platform for selling and trading purposes.

“As far as I know, an NFT of this type has never been created and sold before, so I’m really excited to be breaking new ground here,” said Natale. “As artists, we all have those creative projects that we shelve for one reason or another – with some being closer to completion than others. ‘Brood X’ is a fun creature-feature I worked on years ago, infusing it with a lot of creative energy and force, along with appropriately lurid animated art. And although I took this film quite a ways down the road, I had to put ‘Brood X’ away in a drawer for multiple reasons. Well, it’s time to take it out and let someone else own this; someone who will love it as much as I do. ‘Brood X’ can serve as either a nuanced piece of unique NFT crypto art, or be a fantastic undertaking for the right producer.”

The Animatic was created by crypto artist Lori Hammond.

Learn more about the sale of the “Brood X” NFT and Nicole Natale‘s creative process by going online.

A mother, musician, artist, philosopher scientist, and prolific multimedia artist, Nicole Natale is the creator of more than 28 individual pieces of work including documentary films, books (some under various pennames), film projects, and a wide variety of online groups that help nurture and advance ideas about family, holidays, travel and food. A writer to her core, Nicole constantly hones her craft, while also maintaining an impressive collection of antique typewriters just for fun. Learn more about her at: www.NicoleNatale.com.