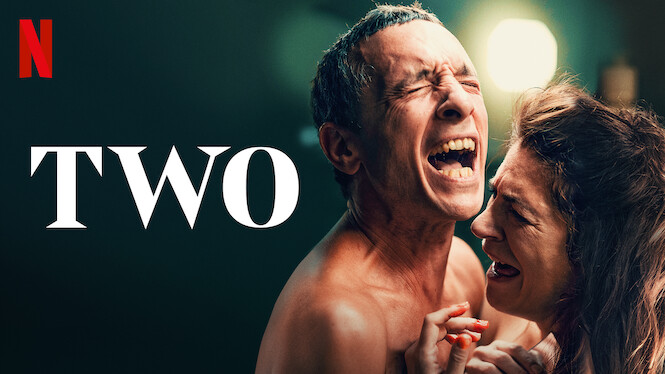 It’s a premise that’s half urban legend and half hideous nightmare – Spanish auteur Mar Targarona’s TWO from Netflix launches itself out of the proverbial gate at a full and dangerously uncontrolled gallop. A man and woman, both strangers, wake up in an unfamiliar bed and unknown surroundings naked and surgically sutured to one another at the abdomen. And we’re off!

While the revulsion and terror they feel is instant, the still raw and painful stitches transform every movement into searing agony. With their faces just inches apart, they spend a nice chunk of screen time going through all of the Kübler-Ross-esque stages of being unwillingly stitched to a stranger — panic, accusation, dread, and perhaps most surprisingly, a rush of libido. But for the moment, there’s no separating the two from one another, or either of them from this very bad dream.

While suspicion bubbles just beneath the surface of the action, the pair soon realize that despite who or whatever is to blame for their predicament, they’re going to have to work as a unit if they want to have any chance of survival or escape. Fighting back against the pain of their mutual incision, the pair struggle to move as one and explore their terrifying new surroundings. They begin to share their personal histories and backgrounds, and at first blush, they couldn’t be more different from one another. But the two still have a few cards in their respective hands that are yet to be played. Appearances can be deceptive, even at this close a distance when all scars and imperfections are exposed in a cold and unfeeling light.

Early comparisons to Tom Six’s The Human Centipede (2009) and its progeny are certainly understandable considering the premise, but ultimately are a disservice that could turn off viewers that might otherwise enjoy this stylish and thought-provoking movie. This is no slight to the Centipede films — I am a fan, and frankly the initial concept was just the kind of enema the genre needed to flush away the stale taste of endless remakes and Gen Z teeny-bopper dumpster fires calling themselves horror films in recent years. And if it takes a little coprophagia to inspire new horror writers and directors to push the envelope, then I say ring that dinner bell loud and long.

The award-winning Targarona has a long list of writing, acting, producing and directing credits in her native Spain for scary fare such as The Orphanage (2007), Julia’s Eyes (2010) and the 3D thriller Paranormal Xperience (2011). Screenwriters Cuca Canals, Christian Molina and Mike Hostench help bring this terrifying vision to life. Pablo Derqui and Marina Gatell deftly portray our fated couple.

TWO clocks in at a slim and trim hour and 11 minutes, so the narrative moves quickly. As the pair begin to untangle this mystery — while they themselves remain inextricably intertwined — there’s plenty of gorgeous scenery to take in, flashes of darkness and light that keep us disoriented and a handful of important clues that let the audience do their own bit of sleuthing as we hurtle breathlessly towards a climax that you most likely won’t see coming. But viewers that carefully weigh the things they see with a critical eye might be rewarded with a truly satisfying a-ha moment as things draw to a close that will leave mouths agape for the last 20 minutes of exposition.

Writing a review without giving away the store is challenging. I might be pricing myself out of the market here, but it’s not the worst idea to simply settle in and watch TWO without reading too many articles about it. Inevitably, some clumsy coverage somewhere is sure to drop a dime and spoil it for you, and that’s a shame because it’s a payout worth savoring, and makes for a delightful shocker of a horror movie that’s well worth your time. Multiple viewing options are available with a competently dubbed version, as well as Spanish and subtitled features that don’t distract you from the action.

Ultimately, TWO is a film about the pain and indelible scars that come from loss. Whether we’ve lost the ones we love or that piece of ourselves that we thought defined us as a person. For once we’ve untethered ourselves from that, there’s no going back.