Arrow TV – A Dystopian Look at the Film Industry in MAN UNDER TABLE, Streaming August 2 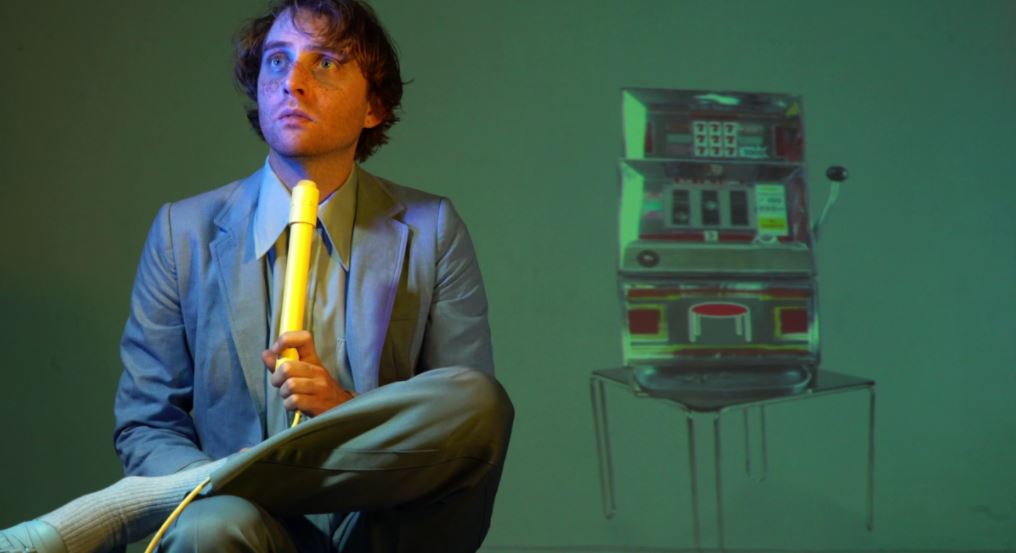 “perfect for those looking for cinema beyond the quaint and contemporary..”

— Andrew Mack, Screen Anarchy ““speaks to the screenwriting experience in a similar way that Adaptation does except with more vitriol and less Nicolas Cage” — Lorry Kikta, Film Threat

London, UK – Arrow Video is excited to announce the ARROW release of Noel David Taylor’s bizarre filmmaking comedy Man Under Table, available exclusively to subscribers in the US, Canada, the UK and newly launched in Ireland. The feature debut from writer/director Noel David Taylor, who also stars as Guy, a beleaguered, hilariously obnoxious scriptwriter navigating his way through the chaotic indie film scene in a dystopian Los Angeles, Man Under Table world premiered at the Slamdance Film Festival and screened at the Chattanooga Film Festival. The film will debut on ARROW August 2nd.Man Under Table is an inventive and quirky comedy that skewers the hustle and grind of independent filmmaking, as seen in ARROW’s doc Clapboard Jungle.

Ahead of the release of his debut feature, Taylor shared: “For as long as I have been making videos, I have been making odd, absurdist, borderline camp videos. It is not an easy thing to find an audience for such films. Which is why when something fits as effortlessly into a catalog as Man Under Table does into Arrow’s, it’s not only a relief — but a homecoming of sorts. The first time one explores the arsenal of films Arrow has arranged, you find yourself hard-pressed to not be overwhelmed with not only a magnificently varied beaucoup of horror, camp, and just plain evocative films, but also an abundance of style, humour and fun. I could not have found a better home for my film if I conjured it from the ether. To whom it may concern: go watch these films!”

In Hollywood, it’s who you know, not what you write.

Guy is writing a movie, or so he claims in bars, parties, pretty much wherever he can. Guy eventually stumbles into the path of Indie darling Jill Custard and her lackey Ben who endlessly accosts him and pull him into projects that are not his own. Frazzled and frustrated, Guy decides to join forces with a washed up neverbeen Gerald, and the duo plan to write what could be the dumbest movie ever made.Set against the backdrop of a crumbling dystopian Los Angeles, Man Under Table pushes a spotlight onto the endlessly bizarre world of the Hollywood movie industry where things are never easy, dreams are crushed, content is king, and you’ll need to wear a gasmask to cope with the unnamed toxins in the polluted green air…

Head over to ARROW to start your 30 day free trial.
Subscriptions are available for $4.99 monthly or $49.99 yearly.

ARROW is available in the US, Canada, the UK and Ireland on the following Apps/devices: Roku (all Roku sticks, boxes, devices, etc), Apple TV & iOS devices, Android TV and mobile devices , Fire TV (all Amazon Fire TV Sticks, boxes, etc), and on all web browsers at https://www.arrow-player.com.

ARROWEssentials curates collections based on genre, decades and themes; and ARROWStories takes a fresh look at the world of film and TV with exclusive documentaries, interviews and video essays diving deeper into the many curated seasons and titles on the platform for a richer and deeper viewing experience.

With a slickly designed and user-friendly interface, and an unparalleled roster of quality content from westerns to giallo to Asian cinema, trailers, Midnight Movies, filmmaker picks and much, much more, ARROW is the place to go for the very best in on-demand entertainment.