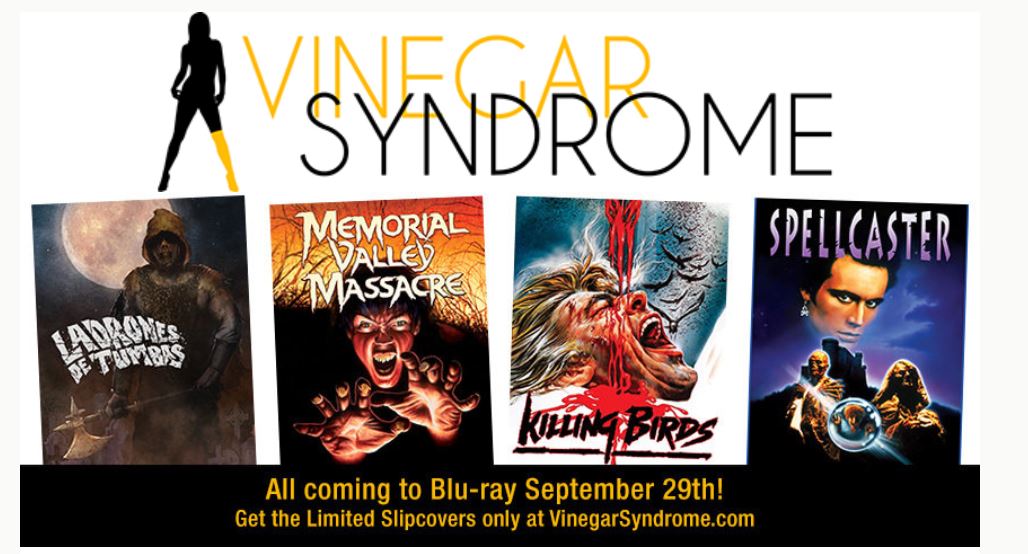 It’s nearing our favorite time of the year…
When we get to unveil our heaviest hitters and (hopefully) biggest surprises! But before the first peek at our fall lineup, you know what this email means: AUGUST TITLES ARE IN STOCK AND SHIPPING!

To recap, they are:
Alfred Sole’s bonkers and all-star-cast horror film parody, PANDEMONIUM, which is coming to disc for the first time ever! Arthur Allan Seidelman’s unnerving supernatural headtrip, THE CALLER! Gary Graver’s delightful sex comedy, INDECENT EXPOSURE, uncut for the first time on home video!

Next month’s pre-orders are up!

Now for September, the first of our ‘big three’ Fall months

Ruben Galindo Jr’s ultra gory, brain busting satanic slasher, GRAVE ROBBERS (LADRONES DE TUMBAS) will be making its worldwide Blu-ray debut, in a new 4K restoration of its camera negative! (Before anyone asks, yes, we know we already released a movie called Grave Robbers. This is a different one.)

Next, as we venture deeper into the MGM vaults, Robert Hughes’ killer-caveman slasher, MEMORIAL VALLEY MASSACRE will be making its official disc debut, from a new 4K restoration of its camera negative!

And rounding out the month, Caludio Lattanzi’s disorienting gore-fest, KILLING BIRDS (or, if you prefer, ZOMBIE 5) will be making its worldwide Blu-ray debut, newly restored from its original negative!

But that’s not all! The first of our four new fall VSA titles is now up for pre-order. It’s Rafal Zeilinski’s wacky, Charles Band/Empire Pictures produced SPELLCASTER! Yearly & Halfway subscribers: the coupon code for this VSA release is listed on the product page.

Satisfy your unholy cravings by ordering them all up right now!