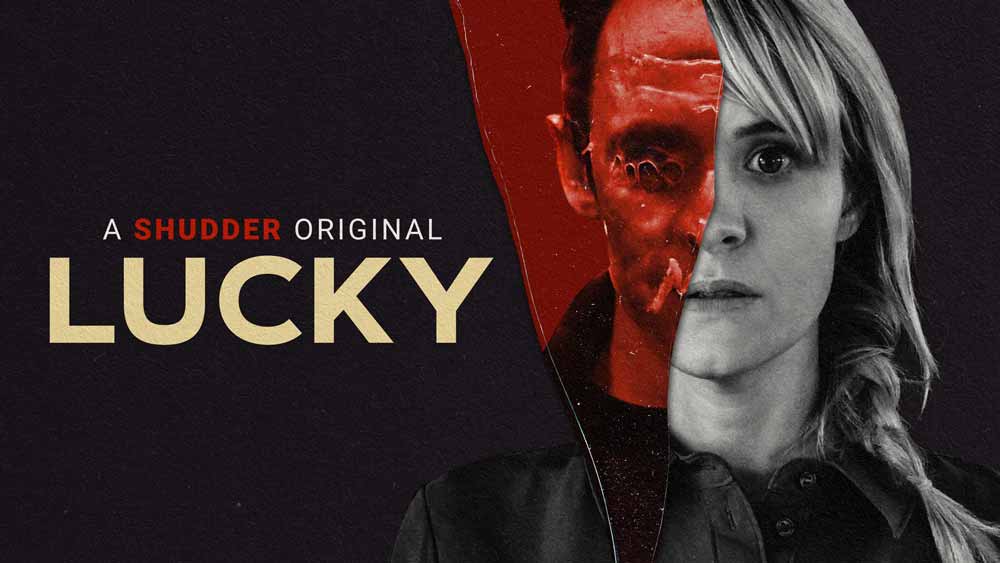 One issue with movies, or TV shows for that matter, is that originality, if not dead, is lacking.  How many sequels or reboots or remakes can one see.  At some point you just have to say enough is enough.  Well, when an original tale does appear, one can generally feel a bit lucky (no pun intended).  The new 2021 film directed by Natasha Kermani, LUCKY (2021), written and starring genre actress Brea Grant is most certainly at the very least an original concept for an unoriginal plot device if nothing more than that.

The movie initially appears to be a home invasion film giving it a comfortable familiarity to the veteran thriller and horror fan.  May (Brea Grant), a middling self help author for women, and her husband Ted (Dhruv Uday Singh) have a fraught marriage.  One night a mask covered invader wearing a leisure suit breaks into their home and attacks May.  After the intruder is incapacitated by Ted, his body mysteriously disappears.  When the police arrive and ask questions, Ted states that this isn’t the first time the prowler has infringed upon their abode.  After giving their statements to the detectives, May confronts Ted with this peculiar news.  Angered, Ted storms off and takes leave at his mother’s home.

From this point, the movie quickly turns away from its original presented theme.  The first change is that the story seems to pivot into the “unreliable narrator” concept.  With Ted now cooling off away from home, May remains at their residence where each night the violent interloper attacks her.  Fortunately his half-hearted murder attempts allows May to often get the upper hand where she’s able to fend him off.  Each time, the end results appear to be his apparent death during their struggle.  Yet while she reaches for her phone to call 911, her attacker’s body has miraculously vanished leaving only his spattered blood on the floor.

The police being as inept as they are, at this point the viewer has to determine if everything May sees is from the perspective of a person with behavioral health issues, a supernatural event which is what she seems to eventually believe, or her simply being a vacuous vessel of a person.  She remains in the house most every night, her guard remains down as she continues to head to bed, there is no attempt to install a home camera system, and she doesn’t use her second amendment rights to protect herself.  Each night turns out to be the same circumstances where she is confronted by the leisure suit intruder ending with his inevitable death.

May’s life expectations are most certainly presented if not explained.  Her latest self help book, Going it Alone, can be interpreted as her belief that a woman (or person) has to pull up their own bootstraps to meet their desired goals.  The book’s catchphrase however “going it alone together” is as meaningless as its contradictory nature presents it to be.  With its middling sales, her agent says there won’t be a reprint, and a third book request is not guaranteed.

It’s noted later in the film that her marriage is on the rocks because of her own self-destructive behavior.  Further details are never explained.  Was her misstep due to the lack of passion between her and Ted or because of an indifferent husband ignoring her self-worth?  During a scarcely attended book signing, her answer to the question whether men and women seem to approach things differently is somewhat revealing in how she may see life.  She says yes to the question but remains unsure.  Yet her answer of “yes” shows her own lack of understanding of herself. Plus it demonstrates the conundrum with identity specific groupings that she seems to miss.  Each person in her audience has only one thing akin with the person sitting beside them – their gender.  But an astute viewer knows each woman has had different life experiences and to clump them together simply by one defining trait is as misleading as it is fallacious.

A further aspect of her mindset is presented during an unexpected visit by her agent.  After much praise of her ability to overcome the dying self help book market, he announces the publisher has decided to ask her for a third book.  He explains how lucky she is to have this opportunity.  Immediately she becomes defensive and says it has nothing to do with luck.  She’s worked hard her entire life to get where she is.  Her acrimony shows a further window into her ruminations but unfortunately leaves much to be answered.  Does she simply have low self-esteem?  Did her parents never treat her seriously?  Is there some other inner demon that never is acknowledged?

At the one hour mark, the movie takes a new turn to the Kafkaesque.  Maybe May isn’t alone with her nightly struggles?  What if more women have the same issue as she – a masked madman hunting them daily.  And if that is the case, how’s her reaction reflect upon her own psyche?  When she defends the safety of her personal assistant Edie (Yasmine Al-Bustami) but ignores other random women, she tells Edie it’s simply because I know you, the others I don’t.  So is she literally “going it alone” in life as her moto seems to be?  Does she help Edie simply because she feels obligated to help an acquaintance or friend?  And is her self help advice nothing more than catchy phrases used to make her royalty checks?

By the time the final minutes come along, and May has a reconciliation with Ted, the finale itself is a further turn in the story.  When the masked intruder is finally revealed, all we have seen prior feels gratuitous and unwarranted.  The movie appears to wrap up with a gender specific message that makes the film feel as if it was just a bunch of sound and fury.

LUCKY has an art house appearance that places its feet squarely in the cinematheque of the surreal.  So it was no surprise to me to find that the response by critics was quite positive.  However, it was also predictable to find that the general cinema viewer gives the film resounding negative reviews.  With the political tribalism in today’s day and age, and a majority of critics firmly encamped as an intellectual select few, the disparity between such mixed appraisal of the film makes complete sense.

I’ve seen huge gaps these last two years between audience and critics responses to television series and movies.  With the months passing, my shift from admiring critical praise has faded as I’ve concluded the normal movie watcher seems to be much more astute than the critic may try to imply.  LUCKY is a fine film as a production.  Its music especially is fitting for the brutal set pieces on display, but its story is accurately much ado about nothing.  At its very best it is a jumbled mess reaching for answers on a multitude of tiresome matters, while at its worst, one’s suspension of disbelief has to be completely hijacked for any gratification.

For the physical copy of the movie, the DVD is the only option for a disc collector.  Upon the movie jacket and its cardboard sleeve included, the “Certified Fresh” RottenTomatoes symbol is marked as a positive advertisement for the film.  Though receiving close to 93% positive praise, what’s left out is the general audience score of 22%.

The presentation of the film is fairly good.  It’s 1:78:1 Widescreen presentation is clear and remarkably displayed.  With much of the movie filmed at night, blacks are not blocky and do not turn into a dark gray.  Daylight sequences are lucent and crisp with detail that wouldn’t be unexpected on an HD transfer.  The Dolby Digital 5.1 surround sound is effective with its sequences of breaking glass and distant sirens.

Though the movie starts immediately when the disc is placed in your dvd/blu-ray player, there is a fairly comprehensive movie commentary by writer/actress Brea Grant and director Natasha Kermani.  The two have an excellent chemistry that reminded me of good friends enjoying a night over drinks.  Grant presses Kermani for more technical aspects of the filming as Grant discusses much of the story set pieces seen on screen.  So any fan of the film would be wise to purchase the physical copy of the disc to hear this enjoyable banter.  The other disc extra is a behind the scenes photo gallery. Suggested pricing is $27.97 USD but a quick internet search will find the DVD for as low as $10.05 from online retailers.

LUCKY will find its audience for sure, but based off much of what the regular moviegoer has felt, the film will return to obscurity not much unlike better art house horror films as SUN CHOKE (2015) or NINA FOREVER (2016) have.  Being a Shudder Original, it will most certainly be highlighted there when it finally reaches that web station, but my thoughts squarely stand with the general audience views of the movie which is to pass on it.