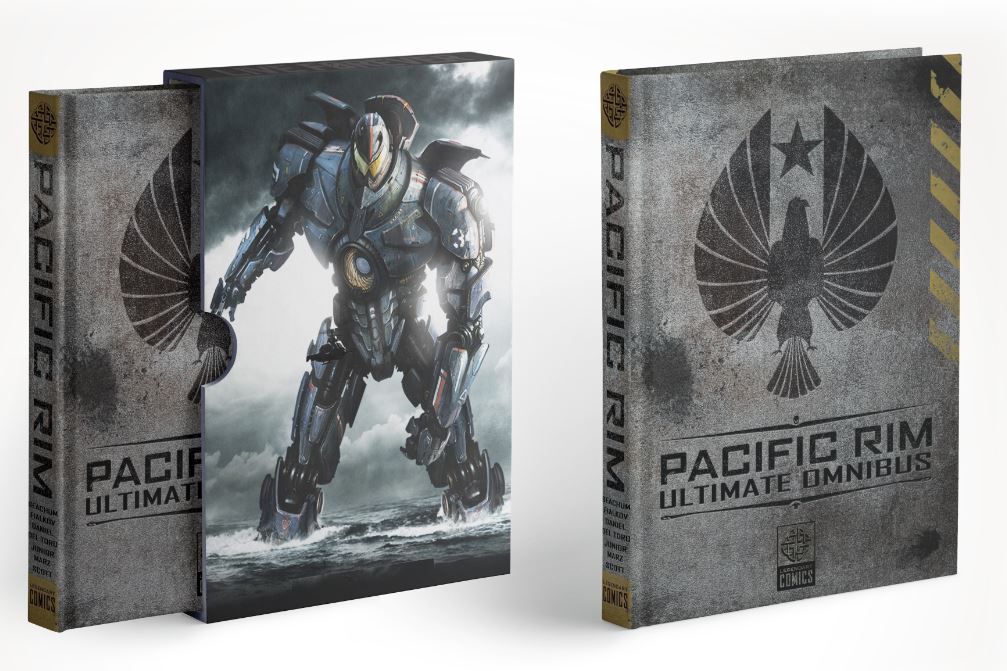 Now available for pre-order exclusively on Kickstarter, the graphic novel tells an all-new adventure featuring fan favorite Herc Hansen in a prequel story based on the hit Netflix Original Anime Series “Pacific Rim: The Black” and the Omnibus Collection brings four past stories together in one volume for the first time

From writer Cavan Scott (Star Wars: The High Republic and Shadow Service) and artist Nelson Dániel (Detective Pikachu, TMNT, Clue), Pacific Rim: Blackout allows readers to revisit the world of Netflix’s Original Anime Series Pacific Rim: The Black in an all-new prequel adventure featuring fan favorite character Herc Hansen. The PPDC Ranger returns as a world-weary jaeger pilot dragged into battle as an influx of kaiju threatens to destroy the Australian continent and all its inhabitants. Along with his niece Olivia, his copilot Cooper, and Marshal Rask, Herc faces brand-new kaiju of epic proportions while battling his own inner demons.

“The Pacific Rim universe is so rich with opportunities to tell all-new captivating stories, and we are thrilled to bring a new prequel adventure based on the popular Netflix anime series to fans,” said Robert Napton, Senior Vice President of Legendary Comics. “Showrunners Greg Johnson and Craig Kyle created such a strikingly beautiful and hauntingly dangerous story featured in the anime series, and I couldn’t think of a better creative team than Cavan and Nelson to capture this vivid storytelling and visual style to bring to the page. We are also thrilled to offer fans of the franchise a new collection that allows them to revisit past adventures.”

“Working with Cavan and Nelson to bring this Pacific Rim story to life has been so much fun,” said Nikita Kannekanti, Senior Editor of Legendary Comics. “Cavan does such a great job balancing the action with the emotional character moments, and Nelson’s art is so full of energy in every single panel. I hope fans enjoy Herc’s story and learning more about what happened before the Black!”

Cavan Scott remarks, “It has been an absolute joy to return to the world of Pacific Rim for this original graphic novel and to also provide a link between the original movie and the fantastic anime series. Herc’s story really resonates with me; a man who has seen the world change and his friends fall away as the monsters keep on coming. But he never gives in, never lets events he cannot control defeat him. The monsters we see Herc facing in his personal life are just as destructive as the kaiju that are razing cities across Australia. As always, Pacific Rim is just as much a story about people caught in extraordinary times as it is a spectacle of monsters vs. mechs. That’s not to say that Blackout doesn’t feature killer kaiju fight scenes. Nelson has done an incredible job balancing cataclysmic events with heartfelt personal moments. I hope Pacific Rim fans young and old enjoy these final moments before Australia becomes the Black.”

“The Pacific Rim universe was something I wanted to draw, the Jaegers and Kaijus and the whole game of proportions is something I really enjoyed doing,” said Nelson Dániel. “I don’t know how many buildings I draw and how many destroyed, but they are never enough when it comes to epic battles. I hope the fans enjoy it as much as I do when I’m drawing it.”

About the Pacific Rim: Blackout creators:

Cavan Scott is a New York Times bestseller who has written for such popular worlds as Star Wars, Doctor Who, Star Trek, Assassin’s Creed, Judge Dredd, Sherlock Holmes and, of course, Pacific Rim. He is the author of Pacific Rim: Aftermath, Star Wars Dooku: Jedi Lost, The Patchwork Devil, Shadow Service and is one of the story architects for Lucasfilm’s epic multi-media initiative, Star Wars: The High Republic. He has written comics for Marvel, DC Comics, IDW, Dark Horse, Vertigo, 2000 AD, and The Beano.  A former magazine editor, Cavan Scott lives in Bristol with his wife and daughters. His lifelong passions include scary movies, folklore, the music of David Bowie, and LEGO.  He owns far too many action figures.

Nelson Dániel has worked for over 15 years in films and commercials as an art director, production designer, storyboard and concepts artist for films like Aftershock and Eli Roth’s Green Inferno, Robert Rodriguez’s Machete, among others. Nelson lives in Chile, where he has published his graphic novels Lucca, 1899 and 1959. He also did all art and colors on The Cape: 1969, monthly series Judge Dredd, Dungeons and Dragons, Clue, Teenage Mutant Ninja Turtles and the Stephen King/Joe Hill collaboration, Road Rage, in addition to the single issues and covers of Ghostbusters, G.I. Joe, Transformers and more. He has also worked with Legendary Comics on the Detective Pikachu graphic novel. He has also worked as colorist for Marvel and IDW on series such as The Cape, Wild Blue Yonder, The Island of Dr. Moreau and the 2015 Eisner Award-winning best limited series, Little Nemo: Return to Slumberland, where he was also nominated for best colorist.