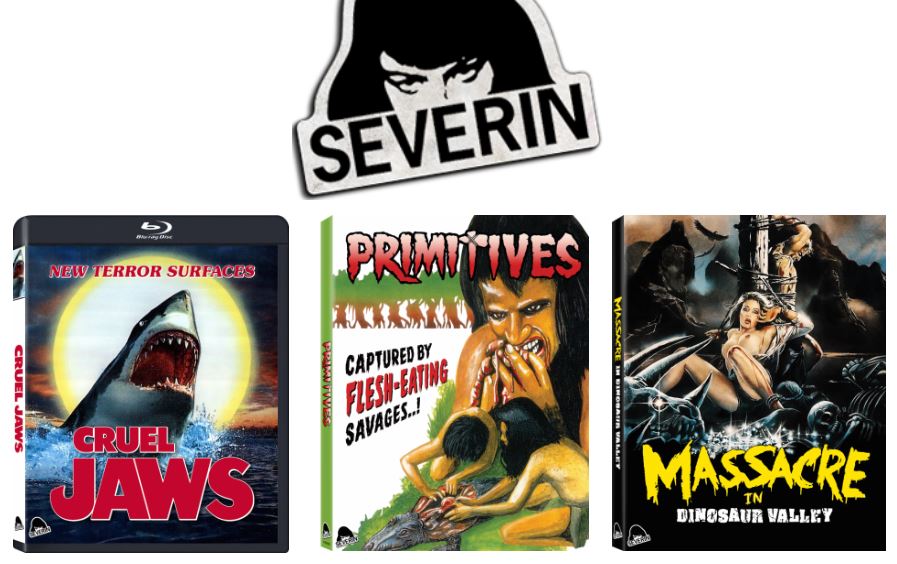 On September 29th, Severin is chumming the waters with a bucket of Italian & Indonesian offal: Bruno Mattei’s deep sea dive CRUEL JAWS, Sisworo Gautama Putra’s Indonesian jungle bloodbath PRIMITIVES, and Italian gut-gorger MASSACRE IN DINOSAUR VALLEY. These titles are available for pre-order NOW from the newly upgraded Severin website with exclusive limited slip cases. CRUEL JAWS also boasts unfathomable merch items such as an original, full-length and jaws-droppingly sleazy novelization and a Very Limited Slipcover displaying the utterly unpromotable and short lived Japanese release title, available for one week only or until all 1500 units are gone, whichever comes first. Rabid genre fans can devour every detail about these upcoming releases by listening to the Severin Films Podcast, available here: https://linktr.ee/severinfilms

He defied all laws of good taste and international copyright with SHOCKING DARK and ROBOWAR. He reset the bar for batsh*t crazy ItaloHorror with RATS: NIGHT OF TERROR and HELL OF THE LIVING DEAD. And in 1995, legendary director Bruno Mattei – here as ‘William Snyder’ – stunned the civilized world with this ultimate sharksploitation saga that liberally borrows characters, plot and footage from Joe D’Amato’s DEEP BLOOD and Enzo G. Castellari’s THE LAST SHARK (and that’s just the tip of a very litigious fin). Filmed in South Florida with a cast of now-ashamed unknowns that includes a Hulk Hogan lookalike, experience “the epitome of outrageous thievery cinema” (All Movie) – actually released in some countries as JAWS 5 – now remastered uncut in HD for the first time ever and presented in two versions: The Mattei Cut AND The Snyder Cut.

It’s been called “top-notch entertainment” (Rock! Shock! Pop!), “a rip-roaring riot of Italian exploitation” (DVD Beaver) and “a weird cross between ROMANCING THE STONE and CANNIBAL FEROX” (The Video Graveyard). Now experience the wildest ‘80s cannibal movie you’ve never seen scanned uncut in 4k from the original negative: Michael Sopkiw (BLASTFIGHTER, KILLER FISH) stars as a cocky paleontologist who crash-lands into a jungle hell chockfull of fashion models, graphic violence, rampant nudity, and tasty gobs of flesh-chomping mayhem. Marta Anderson (BARE BEHIND BARS) co-stars in this ”fromaggio gem from another era” (Bloody Good Horror) – also released as AMAZONAS and CANNIBAL FEROX II – co-written by the legendary Dardano Sacchetti (THE BEYOND, DEMONS) that B&S About Movies says “delivers on everything it promises, except dinosaurs.”