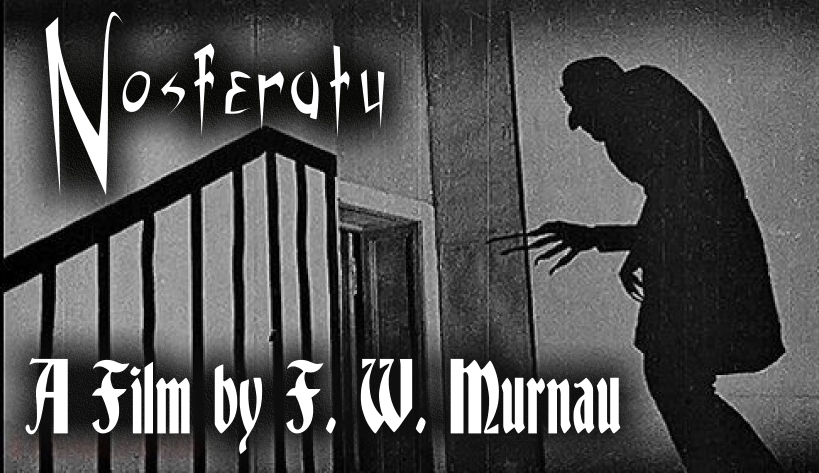 Horror films didn’t just start with Leatherface and Jason Voorhees.  Nor did they start with George Romero and his classic movie, Night of the Living Dead (1968).  Horror films started way back, even before Lon Chaney, Jr.’s The Wolfman (1943).  Earlier this month I wrote an article about my thoughts on another classic horror film entitled Frankenstein (1931).  Well, nine years before that movie, Nosferatu (1922), directed by F. W. Murnau, was released.  Its legacy molded horror films for years to come.

In this highly influential silent horror film, the mysterious Count Orlok (Max Schreck), a wealthy nobleman from Transylvania (now part of Romania), summons Thomas Hutter (Gustav von Wangenheim), an employee of a realtor and estate agent, to his remote castle that resides in the Carpathian Mountains. The eerie Orlok seeks to buy a house in Hutter’s home village of Wisborg, Germany.  Coincidentally the property is but a stone’s throw away from the home of Hutter and his beautiful young wife, Ellen (Greta Schroeder).

After some quite eccentric behavior by Thomas Hutter’s host, Orlok unwittingly reveals his vampiric nature.  Hutter, aware of the danger to those back in Wisborg, struggles to escape the castle, knowing that Ellen is in grave danger. Meanwhile it is discovered that Orlok’s servant is none other than Herr Knock (Alexander Granach), Thomas Hutter’s employer.  As Hutter tries to find a way back to Germany, Knock prepares for his master’s arrival in Wisborg.

The very first time I watched this masterpiece will always remain on my mind.  The look, the set pieces, the camera angles, and the shadowing used within the film happen to be the most apparent characteristics.  The movie is set definitively in what was and is known as German Expressionism.  The technique presents the world the characters live in as a surreal and dreamlike place.  The modus operandi is the staging of the set designs and the peculiarity of the plots.  Buildings are slanted where ninety degrees angles should be, shadows that would not naturally be created from lanterns or the sun cover sections of the landscape, and rooms will either be too small or too large for the house they are supposed to be in.

And for the plots, they follow a procession of such passions as melancholy, sanity, perfidy, and worth.  But they also follow such lofty themes as the loss of faith in self.  Doom, at times, seem to smother the characters and their life, while the strange set designs and shadows make it feel as if the world is closing in on our hero; preventing them from finding deliverance.

Nosferatu has many scenes of surrealism.  The now famous set piece of the elongated shadow of Count Orlok creeping up a set of stairs made this reviewer feel frightened like a child scared of the imaginary monsters that live in a bedroom closet. Max Schreck, the actor who so effectively played Orlok, was assisted quite well by the makeup used to turn him into the vampiric monster we see on screen.  Intriguingly, the actor’s surname translated to English, means “to jump or leap in fear.”  This would suggest itself to be an appropriate pseudonym for someone portraying a horrific character.

Now I’m very aware that not everyone has seen this film.  When I suggest the movie to friends, they become very intrigued.  However I follow the recommendation with the fact that the film is from the silent era.  What happens then?  Of course my friends’ curiosity soon diminish.  You can imagine the many times I’ve heard them say to me, “Why would I watch a silent movie?”  My response is always the same; that any horror fan should want to see the oldest surviving vampire film ever made.

As a result, history has been more kind to a vampire film that followed a few years later.  Of course the legendary Bela Lugosi and his performance in the Universal film, Dracula from 1931, gets much of the credit for directly influencing the modern movie strigoi and rightly so.  And it was the film’s producer Carl Laemmle Jr.’s love of Nosferatu that made him buy the rights to Bram Stoker’s source material.  That allowed him to spearhead the big-screen adaptation of the fabulous legendary novel, Dracula, from 1897.

So with that being said, if it was not for Nosferatu (and in many ways German Expressionism), the time line of horror films and cinema as a whole would be much different.  Of course Dracula became a huge part of horror movie history.  Nosferatu was itself an unauthorized adaptation of the novel since screenwriter Henrik Galeen wasn’t able to retain the rights to it from the Stoker estate.   But this unfortunate dilemma allowed Galeen to add things that unexpectedly facilitated the narrative.

The most obvious was the addition of daylight (or more specifically the sun) upon the vampire.  Its light and warmth causes the death of Orlok.  Prior to this, ultraviolet rays and the warming sun was not part of vampire lore.  In Bram Stoker’s novel, Dracula actually moved about in the day.  Though it did not harm him, it frightened him not much unlike the dark does to a child.  Galeen simply added to it. Instead of fear, the bright light would actually kill the monster.

Another aspect of the plot of Nosferatu was Galeen’s addition of the plague to the story.  With the vampire’s affection and love of the common rat, the arrival of the animals within Orlok’s coffins is the perfect cover for the mass death in the town of Wisborg.  The residents become frightened and lock themselves in their homes as many people begin to die unexpectedly.  Has the rise in population of the common vermin brought with it the Black Death that wiped out much of the world’s population in the fourteenth century?  Or is something much more unexplainable happening?  Maybe the corporeal evil of Orlok himself is the cause; victim after victim has their life drained from them.

Four years prior to the release of Nosferatu in Germany, the Spanish Flu (also known as the 1918 Pandemic) killed millions throughout the world.  Disease was still very much on the mind of people.  Besides the many deaths happening during World War I (1914-1918), fear from infection was clearly on the mind of Henrik Galeen when writing his screenplay.  In many ways a vampire is the physical representation of a plague.  This plot point in Galeen’s original screenplay improbably translates perfectly to the modern era:  COVID-19, fear of disease, and an unknown future.

As for the legacy of Nosferatu, it still lives in other ways besides its obvious influence on cinematic history.  Count Orlok has become one of the most recognizable movie monsters ever created (though his likeness is more identifiable than his proper name).  Many shows, movies, and media have paid tribute to the film and its antagonist.  Orlok has made his appearance in some of the most unlikely places.  The children’s TV show SpongeBob SquarePants has an episode called “Graveyard Shift” where Orlok has some fun with the animated characters that star in the show.

Recently, Joe Hill, the son of the genre author Stephen King, has had his novel adapted into a TV series based on his book called NOS4A2 (a clever rendition of the name Nosferatu).   Also, Stephen King himself had his novel ‘Salem’s Lot (1975) made into a 1979 television miniseries directed by Tobe Hooper where the character of Kurt Barlow appears as a visual interpretation of Count Orlok.

Why would the mini-series of ‘Salem’s Lot deviate from the book and turn Barlow into Orlok?  Well, unlike the very human-like appearance of Dracula (and Barlow from ‘Salem’s Lot presented in the book), Count Orlok’s appearance (and in some ways his backstory) may be more frightening.  His manifestation is very much humanoid.  He has a rat like nose, ears that look more demonic, and his hands seem to have talons rather than normal fingers.  And the locals of Transylvania have heard rumors that he was actually a creation of Belial, one of Satan’s lieutenants.  They, as a result, have nicknamed him “the bird of death.”  Its connotation allows Orlok to be a representation of an encircling plague upon the lands around his castle.

In 1979, the great German director, Werner Herzog directed a highly regarded remake of the film starring Klaus Kinski and Isabelle Adjani.  Following, two decades later in the year 2000, E. Elias Merhige directed the well received Oscar nominated film Shadow of the Vampire.  The movie was based around the filming of the original Nosferatu where Orlok was indeed a real vampire.  The film stars Willem Dafoe as Max Schreck, Catherine McCormack as Greta Schroeder, John Aden Gillet as Henrik Galeen, and John Malkovich as F. W. Murnau.

So Nosferatu indeed has left a strong impression upon horror cinema to this very day.  There are some very fine editions of the movie available on home media including a two disc blu-ray set from the fabulous boutique label Kino Lorber Films.   This includes not only a fully re-mastered edition of the movie but also an outstanding hour long retrospective documentary on director F. W. Murnau.  Yet for those inclined, the movie is readily accessible on streaming services.  As this article is written, the fully free Tubi TV streaming service had an entirely uncut edition of Nosferatu available.  That alone leaves me with only one thing left to say – go see this movie.