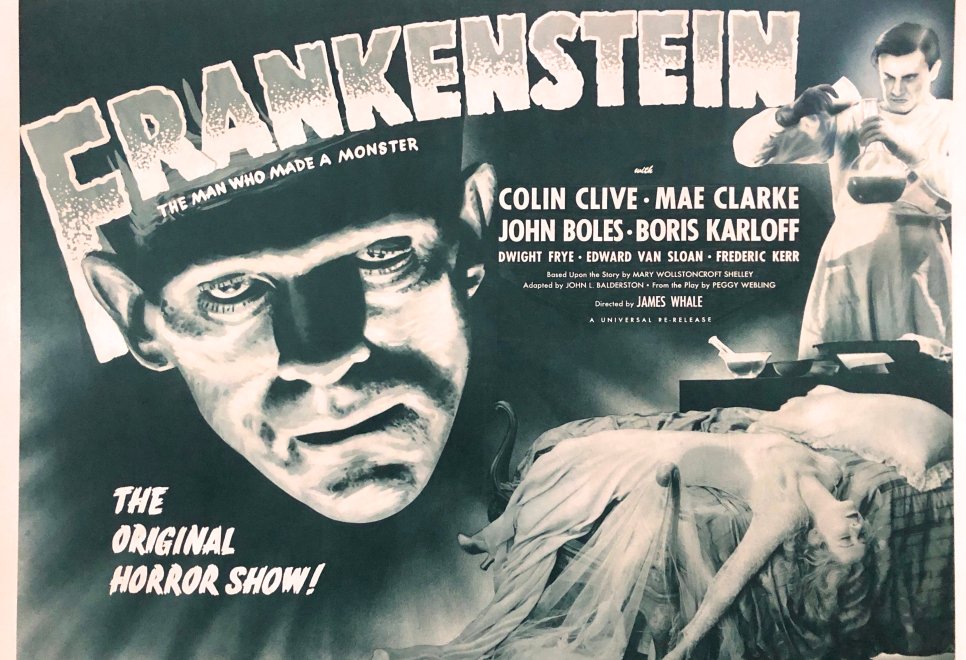 The novel, Frankenstein; or, The Modern Prometheus, written in 1818 by English author Mary Shelley, in many ways was a groundbreaking book.  It was written at a time by a gender not known for horror novels.  She became a pioneer in the early days of popular fiction.  Since its release, it has never fallen out of print.

Its adaptation to cinema was itself a revolutionary effort by Universal Studios.  Released only four years subsequent to The Jazz Singer, the 1927 Al Jolson vehicle that was the very first “talkie” film, this iconic horror movie follows the obsessed scientist Dr. Henry Frankenstein played by Colin Clive (One More River, Mad Love) as he attempts to create life by assembling a creature from body parts of the deceased.

Aided by his loyal misshapen assistant, Fritz played by Dwight Frye (The Vampire Bat, Dracula), Dr. Frankenstein succeeds in animating his monster played by Boris Karloff.  The role became one of the most iconic in cinema history.  Confused and traumatized, Frankenstein’s monster escapes into the countryside where he begins to wreak havoc amongst the local residents.

The doctor, horrified his creation has gone missing, searches for the elusive being, and eventually must confront his tormented creation. One of the tale’s biggest messages is the danger of man trying to harness the power of science.  And Dr. Frankenstein pays the ultimate price for his own self-importance and recklessness.  The film shows the flaws in humankind as the individual thinks and therefore tries to play the God-like persona they sometimes believe they can be.  And yet all too frequently the results lead to complete and utter annihilation.

In some ways the movie was a trailblazer for genre films that took on additional topics new to the era; things such as robotics, nuclear power, and computers.  It could be said that it was, if not the first, at least the most important movie within the “mad scientist” subgenre in cinema.

The role of the “monster” jump-started the career of Boris Karloff.  He went on to a livelihood that spanned for an additional forty years out of a fifty year career.  Besides bringing Frankenstein’s monster to zeitgeist status, he made such characters as The Mummy (1932) and the Grinch popular figures in pop culture.  Some additional films he starred in include Roger Corman’s The Terror (1963) and The Raven (1963), Mario Bava’s Black Sabbath (1963), and Peter Bogdanovich’s Targets (1968) just to name a few.

In addition, Jack Pierce, a Hollywood make-up artist, was the man behind creating the iconic look for Karloff as Frankenstein’s monster. Though not a faithful adaptation to the Mary Shelley book, the movie monster’s form became the definitive appearance of Frankenstein’s monster ever since.  Pierce would go on to work with Karloff again as The Mummy (1932) and also with Lon Chaney, Jr. in The Wolfman (1941).  A timeless classic, Frankenstein became the most notable and influential of all the universal monster films.  It still remains a striking guise as a stunning and innovative visual.

Though in an era where producers dominated and directors were nothing more than “yes-men” to their whim, specific attention needs to be given to the movie’s director, James Whale.  Though known for this defining film, he also directed The Bride of Frankenstein (1935) which some critics say is better than its predecessor.  Not to be overlooked, he directed the film, The Invisible Man (1933) starring Claude Raines, based off the 1897 novel of the same name authored by H. G. Welles.  Though Whale’s success was short lived (only eleven years), his impact on the horror genre most certainly has not been forgotten.

On a more lighthearted note, there is a well known yet little seen goof in what otherwise is an almost perfect production.  During the key moment of the film when the monster is being raised on its gurney to be animated, a crewman is seen on the left side of the screen. This filmmaker appears to be behind a curtain of some sort and is looking down while attending to some various filming equipment.  Even the “perfect” film is as flawed as Dr. Frankenstein himself.

During October and the month of Halloween, the astute horror fan may enjoy watching specific films for the season including John Carpenter’s Halloween (1978), Michael Dougherty’s Trick R Treat, or Stan Winston’s Pumpkinhead (1988), but I personally couldn’t go without putting this movie close to the top of my own personal list.  I generally love classic horror cinema.  And yet many seem to have never seen some of the best horror films because of their “dated” black and white presentation.  That most certainly is a mistake for all who have avoided such movies.  To reiterate, I can say this is definitely a movie that you will never forget.  Though not every film is for everyone, I would wager that 1931’s Frankenstein will be a film most viewers would return to again and again and again.