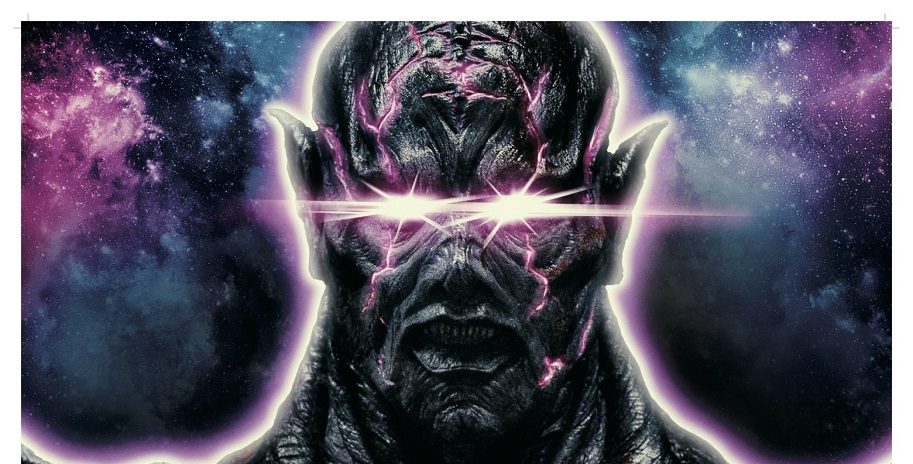 With 2020 now over, and everyone releasing their best-of-year lists, it’s that time to start digging through the first few genre releases of the new year.  Last year such films as VFW and The Lodge showed up early and remained two of the best at year’s end.  So even in quarter one, some really good films do get released.  Well, I think I may have found this years VFW or The Lodge.  Definitely a different film than those, PG: Psycho Goreman still falls in the category as one that should be remembered for best-of-year lists in December.  Sure, sure, it’s early and who knows what will be coming out next, but let’s really take a quick look at PG: Pyscho Goreman.

Director Steven Kostanski, the Canadian filmmaker, is probably best known for his role as the main director for the production company Astron-6.  Such films of note are The Editor and Father’s Day, but what really put him on the map was The Void.  A true throwback horror film with a John Carpenter “feel”, that movie got rave reviews and became an immediate fan favorite.  So with that success, any film that he’s involved in gets interest from me.

So let’s get into my review.  This is an instant cult classic in my opinion.

What a way to kick off 2021 with this amazing flick right here.  Wow, what an unexpectedly good movie.  For a smaller budget and a lesser known cast, it went back to Astron-6’s earlier days before The Void when they did many over-the-top grindhouse films; much like a Lloyd Kaufman film.  After this one, I’m hoping to see a lot more fromd Steven Kostanski in the near future.

Let me start by saying parts of PG: Psycho Goreman reminded me of the Sam Raimi 1992 cult classic Army of Darkness.  That film, with its dark humor and set pieces, was a perfect example of the ridiculous midnight movie that many horror fans enjoy.  And this film is now accepting and carrying the torch, so to speak.  But as I mentioned earlier, PG: Psycho Goreman is definitely similar to a Troma film from Lloyd Kaufman.  Director Steven Kostanski is already known for his remake of Father’s Day (the original being a Troma film), and now PG: Psycho Goreman pays tribute to such movies like Troma’s arguably most famous grindhouse classic, the 1984 The Toxic Avenger.

PG: Psycho Goreman was fun and dark, however, like the throwback 42nd Street out-of-leftfield grindhouse movies, it was loaded with gore!   And to boot, it was mostly done with what appear to be practical effects.  Low budget that it is, the creature designs are just amazing, as some of the screen shots in this article so articulately display.

Now just like Army of Darkness or The Toxic Avenger, PG: Psycho Goreman has its tongue firmly in cheek.  The movie is filled with the B-movie madness that brings laughs from start to finish. As part of the horror comedy subgenre, the movie pays heavy homage to the horror movies of the 1980s.  That homage includes both the intentionally funny like Basket Case and those that were unintentionally funny like Ghoulies.  So if you like your grins to come with gruesomeness, this one surely will provide.

So how did I hear about this film?  Well, low budget and low profile, like most horror films, I heard about it from a friend.  When my buddy recommended this movie to me, I took a look at its trailer.  Check it out right here.  That was enough for me to see the whole film.

Now, I will say that younger audiences might not particularly get the film.  Unless you are a fan of such films from yesteryear with titles like Killer Klowns From Outer Space, Maximum Overdrive, or Troll II, you may be completely confused at what you are viewing.   But that reboot of the grindhouse subgenre like Hobo With a Shotgun and Zombeavers may have already prepared you.

As soon as I finished the flick, I did an internet search on when this movie was going to be released on Blu-ray.  Fortunately it’s coming soon enough with a scheduled release date of March 16, 2021.  But to be honest, I really wish I could get my hands on a copy right away, hoping it would be filled with disc extras.  Also I was also able to find out that later during the year, PG; Psycho Goreman will be released on Shudder, the all genre subscription television channel.  And those of you that are familiar with the Shudder’s The Last Drive-In With Joe Bob Briggs (and Darcy too) can only hope to see the movie played there.   From one fan to another, wouldn’t that be amazing?  Everyone raise their hands.

With all that being said, here are the extras that I’m looking forward to on the upcoming Blu-ray release.   Now I’m not quite sure if any will be included, but one can hope.  How about a director’s commentary to start?  Plus what about a fantastic documentary that would show how those gore effects were created?  And hopefully like movies that were recently released under the Shudder label, I’m so hoping we get some exclusive merchandise along with everything else.

Now call me crazy but I could definitely see Fright Rags, the genre t-shirt company that officially releases licensed memorabilia, sales a kick ass T-shirt with the movie’s poster on display.  But mainly, I’m hoping this movie gains some ground in the horror community so we can meet these guys behind the film at a con one day.  Cheers.

AVAILABILITY:  You can rent this now anywhere you rent your movies.  Also you can grab a disc copy in March by preordering it wherever you purchase your blu-rays.