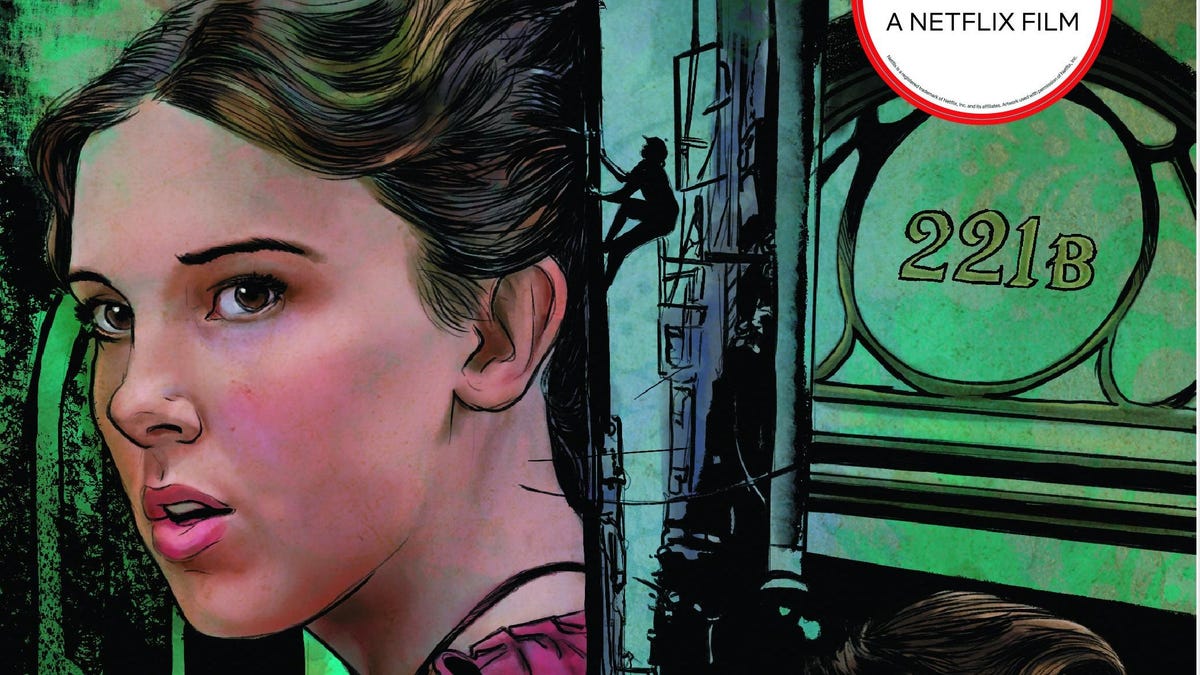 The beloved teenage super-sleuth is coming to comic form on August 23, 2022, in Legendary Comics YA’s upcoming graphic novel ENOLA HOLMES: MYCROFT’S DANGEROUS GAME, from author Nancy Springer, written by Mickey George with artwork by Giorgia Sposito.Starring Millie Bobby Brown (Godzilla vs. Kong, “Stranger Things”) as the young and brilliant Enola, the graphic novel will feature an original story that bridges the adventures of the first film with the highly anticipated sequel forthcoming on Netflix.

Picking up where last year’s exceptionally popular film left off, readers and fans will join Enola, the rebellious teen sister of Sherlock Holmes (Henry Cavill), in a thrilling adventure and uncover the new mystery that she is up against. After a mysterious group of anarchists abduct her brother Mycroft (Sam Claflin), Enola investigates his disappearance in hopes of rescuing him and recovering something precious he took from her. With the help of Lord Tewkesbury and a young boy on the streets named Shag, she uncovers the truth behind her brother’s abduction and unravels a web of mystery that takes her deep into the London underground as she tries to foil the anarchists’ nefarious plot!

“We are so excited to expand Enola’s world and story with an exciting new adventure in our graphic novel from this extremely talented creative team,” said Nikita Kannekanti, Legendary Comics’ Senior Editor. “Nancy has come up with a really fun story with some charming new characters and some returning familiar faces. I hope fans will enjoy solving the mystery with Enola!”

Springer continued, “it was a great pleasure to develop this new Enola Holmes adventure with such a talented team, and it is an even greater pleasure to be personally included as a cameo in the graphic novel!  Can you find me?”

Nancy Springer’s Edgar Award-nominated book series, The Enola Holmes Mysteries, is comprised of six novels that put a dynamic female twist on the world’s greatest detective and his brilliant family, and features the rousing adventures of Enola, a gifted super-sleuth in her own right who often outsmarts her famous siblings. The first film became one of the most-watched original Netflix films of all time with an estimated 77 million households choosing the film over its first four weeks of release. The sequel is currently filming.

Mickey George (writer) is a writer and illustrator, whose debut graphic novel The Heart Hunter released from Legendary Comics in August 2021, and is working on her LGBTQ+ steampunk webcomic The King of Trouble. When not writing comics, she works at the library and writes game scripts for visual novel apps. She currently lives in Salt Lake City with two big dogs, and way, way too many books.

Giorgia Sposito (artist) is an Italian comic artist who has worked for several publishers. She started as an inker for IDW Publishing on Doctor Who: Prisoners of Time and Star Trek: Khan. Since then, she has worked as an artist for Zenescope Entertaiment (Charmed, the Wonderland series), Titan Comics (Doctor Who: The Tenth Doctor series, The Many Lives of Doctor Who, and Doctor Who: The Thirteenth Doctor Vol 1: A New Beginning, and Dynamite Comics (Bettie Page & Apocatequil’s Ring). In 2019, she worked for Legendary Comics on Carnival Row: Sparrowhawk. She is currently working again with Legendary Comics on Enola Holmes and on a creator-owned project for Vault Comics.

About Legendary Comics YA:

The Legendary Comics YA imprint is dedicated to telling original and character-driven stories across a wide array of genres. With a commitment to amplify new voices, spotlight diverse perspectives, and seek out passionate talent telling authentic stories, the imprint gives emerging and veteran artists a platform to share stories never told before and retell classics from a new point of view, in hopes to transport readers to other worlds that span a range of genres, from fantasy to historical fiction, and beyond. Titles included in the slate are: Championess (inspired by bare-knuckle boxer Elizabeth Wilkinson in eighteenth century London from Tarun Shanker and Kelly Zekas); The Heart Hunter (a debut OGN from Mickey George, set on a cursed island where everyone is doomed to where their heart on their sleeve and explore immortality, love and greed); Lupina (an orphaned girl raised by a wolf, goes on a quest for answers and revenge); The Witches of Silverlake (following Elliot Green and his coven of queer, teen witches in Los Angeles from singer-songwriter Simon Curtis)and Tragic (a retelling of Shakespeare’s Hamlet from a queer lens and told through the eyes of a 17-year-old girl).

Legendary Comics was born out of a passion for mythic entertainment, seeking out new talent and working with the best and the brightest in the industry to create transportive worlds, inspirational characters, and spectacular adventures that leap off the page. Founded in 2011, Legendary Comics has produced an exciting catalogue of original titles that continues to grow and evolve. From partnerships with industry legend Frank Miller to Grant Morrison’s Eisner-nominated Annihilator, Legendary Comics has a passion for innovative new stories, including the fantasy graphic novel The Heart Hunter, the historical fiction story Championess (based on the true story of Elizabeth Wilkinson) and Jessica Chobot and Erika Lewis’ hit webseries, Firebrand: The Initiation of Natali Presano. In addition to original titles, Legendary Comics also expands the scope of the cinematic universes of its parent company Legendary Entertainment, by bringing big-screen adventure exploding onto the comic book page. Working with the visionary filmmakers and the architects of Legendary’s Monsterverse, they have delivered the level of quality and authenticity our fans demand with New York Times best-sellers such as Godzilla: Aftershock, Pacific Rim: Aftermath, and Skull Island: The Birth of Kong, to name a few. http://www.legendary.com/comics