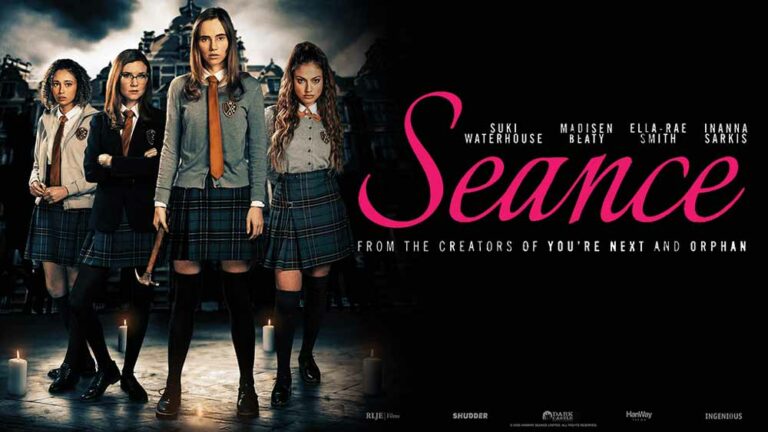 To this reviewer, Simon Barrett is one of the finest genre screenwriters working today.  His amazing film, A HORRIBLE WAY TO DIE (2010), is consistently listed as one of my personal favorite horror films these last twelve years.  Even though he wrote that amazing movie, he’s probably best known for such films’ screenplays for YOU’RE NEXT (2011) and BLAIR WITCH (2016).  Further, his other collaborations with director Adam Wingard are legendary in independent genre cinema including THE GUEST (2014).  On top of all that, his acting and associations with Joel Swanberg (24 EXPOSURES (2013)) and the mumblecore subgenre of cinema has been outstanding.  Now finally, after many years providing the stories and the scripts for others, Simon Barrett has made his long awaited debut as director of a motion picture.  Once again, scripting but now adding directing to his resume, his latest film SÉANCE has just been released to blu-ray after an initial run earlier this year on VOD.

SÉANCE is an interesting change for Simon Barrett.  It is effortlessly placed within the horror genre, but it is unlike much of his other penned films.  The most obvious characteristic about the movie is that it’s essentially a love letter to films from yesteryear.  It has a cast of young coeds that would fit easily within any slasher or teen horror movie from the 1980’s.  And its plot pays tribute to such drive-in fair as the all-girl led cult classics THE CRAFT (1996), SUSPIRIA (1977), or JENNIFER’S BODY (2009).  Whether Barrett was intentionally doing so is arguable since many critiques of SÉANCE and interviews from those involved with the film mention little about paying tribute.  But no matter, the fingerprints of films from another era are all over what we see on the screen here.

The film starts with the commonly used flashback scene.  A group of coeds at Edelvine Academy for Girls, a prestigious boarding school that has seen better days, decide to take part in summoning the Edelvine Ghost.   Decades earlier, a young woman had committed suicide in the dormitory and it’s believed that her spirit has been haunting the halls ever since.  After the event is revealed to be a prank, one of the girls, Kerrie (Megan Best), heads back to her dorm room feeling troubled by the experience.  Unfortunately a tragic accident occurs leaving her dead.  So sets up our film.

During her first day, she quickly becomes friends with another student, Helena (Ella-Rae Smith).  There friendship in many ways has a touch of sexual undertones to it.  Her other encounters include meeting the same group of girls from the earlier flashback scene including queen bee Alice (Inanna Sarkis) and brainiac Bethany (Madisen Beaty).  While the girls eye each other suspiciously, Trevor (Seamus Patterson), the son of Mrs. Landry who’s also the serviceman for the dormitory, walks among the halls making sure all is well.

As the title of the movie would imply, our group of protagonists decide to do a séance, in this case to communicate with the spirit of Kerrie.  Creating a homemade Ouija board, and using lipstick in the most inventive way, something indeed may have been conjured.  And Kerrie’s death may have only been the beginning.

The movie’s mystery is slowly revealed before a handful of very subversive twists occur.  At that point, the prior off screen violence is replaced with intense gore, and the fairly quiet ghost story suddenly turns into a no holds bar massacre.  The movie is most certainly unique with this sudden change making one wonder if the early death scenes were filmed for a potential PG-13 theatrical release.

With the newly released blu-ray version of the film, the movie has an interesting look.  The muted cinematography by Canadian filmmaker Karim Hussain has a buff to it that reminds one of the film IT FOLLOWS (2014).  Just like that movie, Barrett seems to create a faux period piece for the setting.  With the dormitory’s worn hardwood floors, dated paint and wallpaper, subdued iridescent lighting, and the girl’s retrograde school uniforms, the somber picture that’s portrayed on your high definition television keeps Simon Barrett’s original intent intact yet exhibits a clarity that shows such detail as dust on the wall sconces.

The disc presents the main feature as 1080p High Definition Widescreen 2:39:1.  Pretty standard for the modern blu-ray and as good as any film will look before one advances to 4K.  The audio, as well, is a strong 5 channel resonance – DTS-HD Master Audio 5.1.  Being the haunting yet violent film that it is, each channel is used quite effectively giving the viewer the cinematic experience that most likely would have been if the movie had had a major theatrical release.

Bonuses include a director’s commentary, a behind the scenes feature, outtakes, deleted scenes, a so-called decapitation pre-viz (probably titled unintentionally as a spoiler), and a behind the scenes photo gallery.  The highlight of course is the director’s commentary.  Simon Barrett does make light of a prior commentary he and his frequent collaborator Adam Wingard did to much negative reviews, but he promises here on this solo track to be much improved.  This is most certainly the case.  He goes into full detail on how difficult it is to find an actual school that would allow a slasher movie to be filmed at.  Other topics include how to create an effective crane shot, problems that winter shoots comprise, the pros of some of the Alexa Mini camera, an interesting trick using a $3,000 light bulb to make a faux lit fireplace, and filming a choreographed dance scene.

The disc is available from all the regular online retailers.  The suggested retail price is $28.96 USD, but I was easily able to find it priced as low as $12.99 brand new with a quick internet search.  If you are a big fan of Simon Barrett as I am, or if female led horror films with a school setting interest you, then SÉANCE is most certainly worth adding to your collection.  Whether the film falls in your wheel house or not, the information that Barrett gives in the very detailed director’s commentary is outstanding.  Consider all the other features as bonuses.

For more information, check out Dark Discussions Podcast’s in depth review of the movie on EPISODE 494.