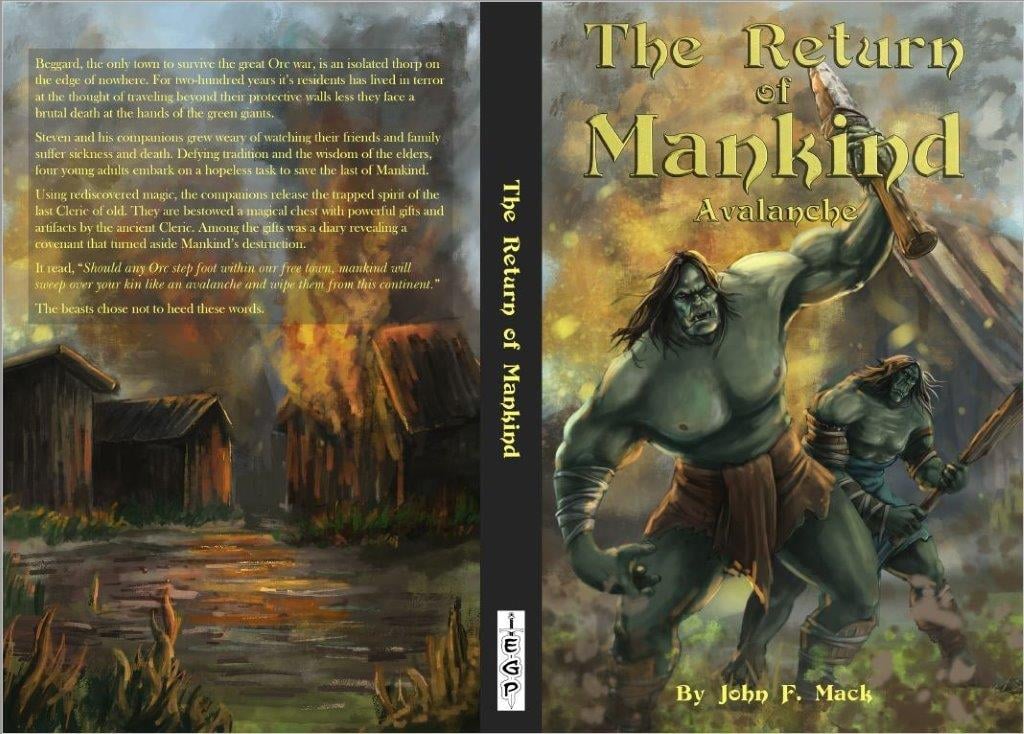 Caroline stood in a rickety tool shed, thinly lined with humble tools of dull blade and rusted steel. She remained alert, unable to tear her eyes away from the partially open door, but it was the wall behind she should have paid attention to.

First chapter of The Return of Mankind: Avalanche

Description: Beggard, the only town to survive the great Orc war, is an isolated thorp on the edge of nowhere. For two hundred years its residents have lived in terror at the thought of traveling beyond their protective walls, lest they face a brutal death at the hands of the green giants. Steven and his companions grew weary of watching their friends and family suffer sickness and death. Defying tradition and the wisdom of the elders, four young adults embark on a hopeless task to save the last of Mankind. Using rediscovered magic, the companions release the trapped spirit of the last Cleric of old. They are bestowed a magical chest with powerful gifts and artifacts by the ancient Cleric. Among the gifts was a diary, revealing a covenant that turned aside Mankind’s destruction. It read, “Should any Orc step foot within our free town, mankind will sweep over your kin like an avalanche and wipe them from this continent. “The beasts chose not to heed these words.

John Mack took the time to discuss his novel
and writing with Dark Discussions:

John Mack: The Return of Mankind: Avalanche started off as an experiment to see how far my imagination would go. When I let my daydreams take over, an entire world emerged. I created a realm where despair grew, and every event only ended in misery. But where there is strife there is also hope. Several times I backed the characters into a corner and took away every foreseeable way out, only to have them find an unpredictable strategy.

The book has the right amount of fantasy, horror, action, comedy and romance. It’s an epic story with many events and foreshadowing. Book two completes the main storyline, however, I am currently forming both a sequel and prequel. The prequel tells the story of the war two-hundred years ago; why the Orcs hate Mankind and why we were nearly exterminated from the world. The sequel tells the story of the next generation, the Orcs’ return for revenge, and an even greater peril that threatens to wipe out both Orcs and Mankind.

I joined the Nashua Writers Group at their first meeting and stayed with them for years. I shared my stories with them, and they with me. The advice we gave each other helped me to grow. I strongly encourage anyone that wants to write to seek out a local writers group and give it a try. Even experienced writers will find they have much to gain from the community.

In my younger days, I learned from reading JRR Tolkien’s stories the things that made his characters great is that they had character. This made me more invested in their events. That’s when I stopped writing about Tom, Dick and Harry, and started creating unique and memorable characters. Only after my cast was created did I form a plot around these people.

I’ve found two methods that have helped me to write my best work. First, daydream. When I lie in bed replaying the scenes of my story over and over, I find myself adding colorful things into the mix each time the story plays. I also find ways to add cryptic foreshadowing for future scenes.

The second thing is to write when I am angry. When I have had a bad day, I find that I am not afraid to go dark and show the despair of the scene I am writing. This helps to trigger emotion in the reader, which gets them invested in the story. Some of my best horror stories were penned thanks to terrible days at work.

I met the head of Elder Gods Publishing at the Nashua Writers Group. He had a full plate back then, but when the timing was right, we discussed making The Return of Mankind a reality. Life threw a few obstacles at us here and there, but with some persistence the editing was completed, the cover art achieved, and the book uploaded to Amazon.

The Return of Mankind: Avalanche is available on Amazon.com in both paperback and kindle versions. Our goal is to have book 2 (untitled) released around June 2021. Some time after, I will expand the world with the sequel, and then revisit the world of Mankind before it was destroyed in an epic prequel.

Thank you to those who inspire me, and to you the reader, without whom my voice would be like song never sung.