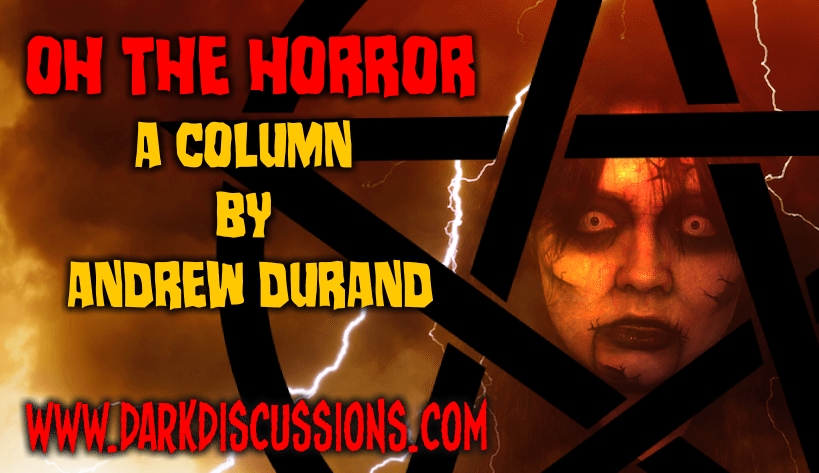 The film is part of Shudder’s latest movies which are exclusive to the network.  The subscription service has recently reached a milestone surpassing one million subscribers.  It is a subsidiary and part of the AMC Network.

The Mortuary Collection is another in the long running anthology films that have become a staple during the Halloween season.  It starts off following a little boy delivering newspapers throughout the local streets of Raven’s End.  Eventually he comes upon the town’s stunning and foreboding mortuary. With his interest peaked, he decides to walk up to the front door and ring the bell.  Though a bit surprised, the door swings open to reveal Montgomery Dark played by Clancy Brown (Starship Troopers, Shawshank Redemption, Thor:  Ragnarok). His presence initially reminded this reviewer of the infamous Tall Man from the classic 1979 horror film Phantasm.

Being the resident mortician of Raven’s End, Montgomery Dark administers the notorious property. With its HELP WANTED sign hanging outside, another visitor, a young girl named Sam, immediately shows interest in the opportunity.  Montgomery, seeing the young girl’s potential, agrees to interview the inquisitive Sam for the position.  This includes an excursion throughout the facility.

During the tour, Sam’s attention is drawn to a small child’s coffin which Montgomery has recently prepared for internment.  The mortician, in amusement, chooses to tell Sam a series of related stories about those that have passed to the “otherworld” leaving Raven’s End behind.  This in part begins a series of four frightening tales told by our peculiar host.  And so our anthology begins.

Though starting off passively, the movie’s slow build-up quickly turns fast paced by the time the second narrative arrives.   This leads to a loosely interconnection of stories filled with the genre’s typical elements of horror, suspense, and chills.

Of course, as even the best of anthology films go, there were a few bits and pieces about the movie that didn’t quite work.  So it isn’t surprising that one of the earlier stories, in this case the first, fell a bit short for me.  I was hopeful that the initial story would immediately grab my attention but alas viewers have to toil through it to get to the much more engaging second tale.  Yet that one misfortune was honestly the only key grievance I found with the film.

On the positive, and there were many, I enjoyed the numerous lead characters throughout each section of the individual tales.  With the movie’s practical makeup and the overall look of the set pieces, the midnight movie iconography and the Halloween atmosphere of the set design made this feature a fine representative of drive-in cinema.

To deviate to a highlight of the movie, the second segment was most certainly one of my favorites.  Remaining as vague as possible to not give away much of the viewing experience, the second tale is a period piece that is firmly placed in the 1960’s.  Frat boy Jake, played by Jacob Elordi (HBO’s Euphoria), is a hero to the fraternity as the one with the brilliant idea to pass out condoms throughout campus. While preaching the value of sexual liberation, he has an ulterior motive.  His objective is to attract as many beautiful and buxom co-eds to the fraternity’s weekend revelries.  Jake hopes many of the young ladies who take him up on his invitation will become potential sexual conquests for his fellow frat boys.

During this most recent hedonistic festivity, good fortune shines upon him as he pairs off with Sandra, a beautiful co-ed.  While making love, unbeknownst to her, Jake secretly removes his condom to experience unprotected sex. The next morning, to his dismay, he finds that he has contracted a rash in his nether regions.   He immediately goes to see the campus physician, Dr. Kubler (played by character actor Mike C. Nelson). While being diagnosed, Jake discovers that what he thought was simply an STD may actually be something much more gruesome.  Could there be something else more parasitic that could be growing inside him?  To not spoil the payoff, I think I’ll save the remainder for your viewing pleasure.

To reiterate, The Mortuary Collection was released on Shudder this October 15th, 2020 during the festive Halloween season.  The movie, with its four scary tales, has a total running time of one hour and fifty-one minutes.  If you’re like me and enjoy a movie with great detail and fine story telling, then you’re in for a treat (no pun intended).  As cinema goes, The Mortuary Collection is a fine edition for the Halloween season.