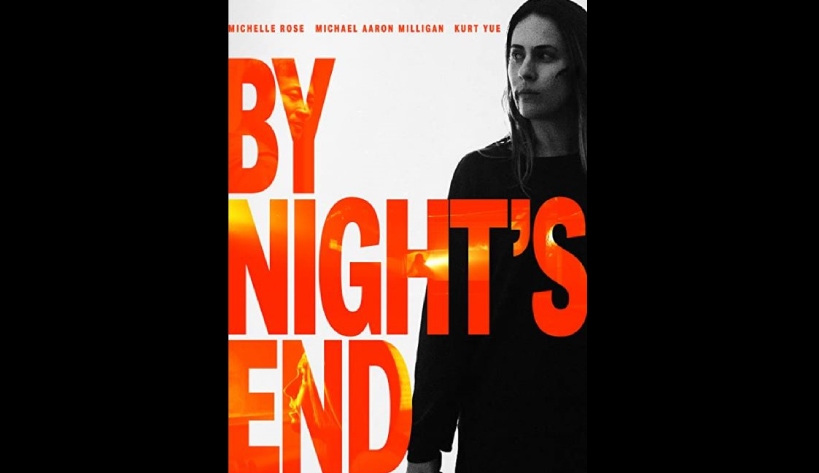 This was a movie that I got the pleasure of seeing a screener when Jenna Wilen from DarkCoast asked if I would be willing to check this movie out for a review. The premise sounded interesting and I’m always up to support independent cinema so I gave it a viewing. The synopsis a couple wakes up in the night to a man searching for something in their home. After they are forced to kill him in self-defense, they decide to take one hour before calling the police to search for what they hope is a hidden fortune.

As the synopsis states, we start this off with Parker (Carlos Aviles) as he approaches a ranch style house. He is then arrested. The movie jumps 2 months in the future where Heather (Michelle Rose) lives there with her husband, Mark (Kurt Yue). Mark is putting up a Christmas tree. He finds an ornament of a little girl and this is where I figured out, they had a child, but something happened. The couple agreed they wouldn’t put up a tree, but Mark couldn’t resist.

From here we learn more about their dynamic. Mark is out of work and he is struggling about it. Heather has a job that she hates and it seems like it is on shaky ground at the moment. It should also be pointed out that she might work with her father and that she is a former sergeant in the military.

It all takes a turn when she hears something in the night outside of their house and she goes to check. There is a great shot of a guy, Parker, leaving the crawlspace door on the side of their house and going for the front door. Heather just missed seeing him and notices the door open. She goes under the house where she hears yelling from above. With her training, she shoots through the floor of the house. She then goes in to see she has wounded Parker. He goes for something and she shoots him, resulting in his death.

Heather wants to call the police, but before Parker died, he offered them $10,000. Mark gets the idea to move him into the bathroom. Take 1 hour and try to find what he was looking for. There is desperation there for money as well as unpaid bills. Things aren’t that easy though when Moody (Michael Aaron Milligan) and the rest of his crew decide to see what is taking Parker so long. It becomes a fight for survival and a race to what was hidden in this house.

That’s where I want to leave the recap as the premise to this movie isn’t something that we haven’t seen before and there really isn’t a need to go into spoilers. With that said though, I don’t want you to think that I hated this movie though. It is a quick watch at less than 90 minutes and it really did fly by.

To pull apart the story a bit here, I do think that the concept is a bit convoluted. Heather kills Parker. It would be self-defense. Mark perks up thinking they could find whatever he was looking for to solve their money troubles. There is legitimately nothing stopping them from calling the police and then just searching the house without any interference. As the movie goes on though, we see there are different things happening. I rolled my eyes at this early part. It did bring me in as it goes though. I just feel they could have done a bit better with the set up.

Once Moody gets introduced though, I’m all in. He is such a great character that despite being a villain, I liked him. A lot of it is how well Milligan plays this role. He brings such charisma to it. He says things that are funny, even though most of them are horrible. Moody seems to be in control, but I like as it progresses, he does lose that and he becomes more dangerous in my eyes.

Heather is a great counterpart for him. I dig that this movie plays with gender identities a bit by flipping Heather and Mark. She is former military and is currently the only income. Even before he lost his job, it does seem she was making more than him. Even though she doesn’t always seem to be sure what to do, there is confidence here that she has control over things. Mark is making the bad decisions that make things more difficult. He is also trying to make a deal behind his wife’s back and that puts them at risk.

At its core, this is a home invasion movie. It does feel like a lot You’re Next, they just don’t take it far enough into the horror realm. We do get some really good effects that come with the deaths though. The blood in the movie looks good as well. If there really is any issues with the effects would be something that happens with Mark’s hand. I could see it wasn’t as they said. It was brief so there is that.

The cinematography for this movie is great though. I do need to give credit to Walker Whited and Philip Wages. I’ve brought up the one scene earlier on that I really liked. They do some really good things with long shots and with framing that really impressed me. If this movie wasn’t shot as well as it was, I don’t know if I would have liked it as much. They also do some things with lighting, especially with red later in the movie as well.

Really the last thing to go over before closing this out would be the acting. I’ve already said my piece on Rose and Milligan. They both have really good performances here. I wasn’t as high on Yue though. There were a few times that he does well with lacking confidence and showing fear. There were others though where I felt he was overacting a bit. Aside from that, the rest of the cast really did round this out for what was needed in my opinion.

So now with that said, this movie despite my issues with its story early on settles in to be a good dark crime, thriller. The concept isn’t one that I haven’t seen before, but I think the changing of some troupes and messing with gender roles works for me. The acting from Rose and Milligan were really good with the rest of the cast rounding it out. The cinematography was on point and I’d say the effects were as well. There really are just some minor gripes here and there with some things in the movie. I do have to admit, they do hurt the score though. It is still over average for me though and would recommend giving it a viewing if you are into these types of movies.