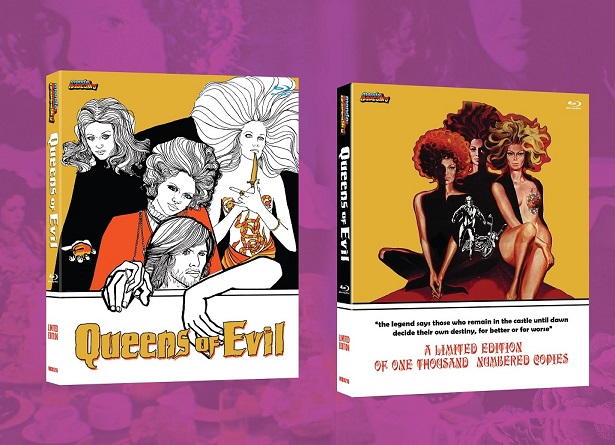 Details on our upcoming slate of films! As mentioned in our last newsletter, we have THREE new Blu-rays in production for our upcoming Halloween Sale in October. One of which we’ve already announced as the long gestating QUEENS OF EVIL! And now we’re ready to reveal a few more details about this LE release …

It will have a slipcover! Slipcover lovers/collectors of the world unite in joy! Ain’t it purty? We can’t do a “red case” release for this one because it will be TWO DISCS! Yes, exclusive to this release will be a bonus DVD featuring a humongous 3 HOUR + career-spanning interview with the late, great Ray Lovelock! You won’t find this anywhere else. If you are a fan of his, this is a MUST-OWN. Also exclusive to this edition will be a booklet featuring brand new writing on the film by Italian film guru Roberto Curti. The disc itself will have a plethora of other extras, including a brand new commentary by Kat Ellinger and Samm Deighan. Full specs will be announced closer to October.

That’s the good news. The only sort-of-bad-news is that this release will be a bit pricier than previous LEs. But only a bit. $28 instead of $25. The other two LEs we are currently prepping will be traditional “red case” releases priced at the usual $25.

But what are those other two “red cases”, you sheepishly inquire? Not ready to spill our beans on those just yet. One of them we are going to keep secret until just before the sale. No hints. But you’re gonna dig it, trust me. The other one we’re working on is something that’s been in production behind the scenes for almost as long as QUEENS! I think we’ll be ready to officially announce it next month. But until then, get ready for a classic 70s Spanish horror film, hopefully uncut for the first time in full HD.