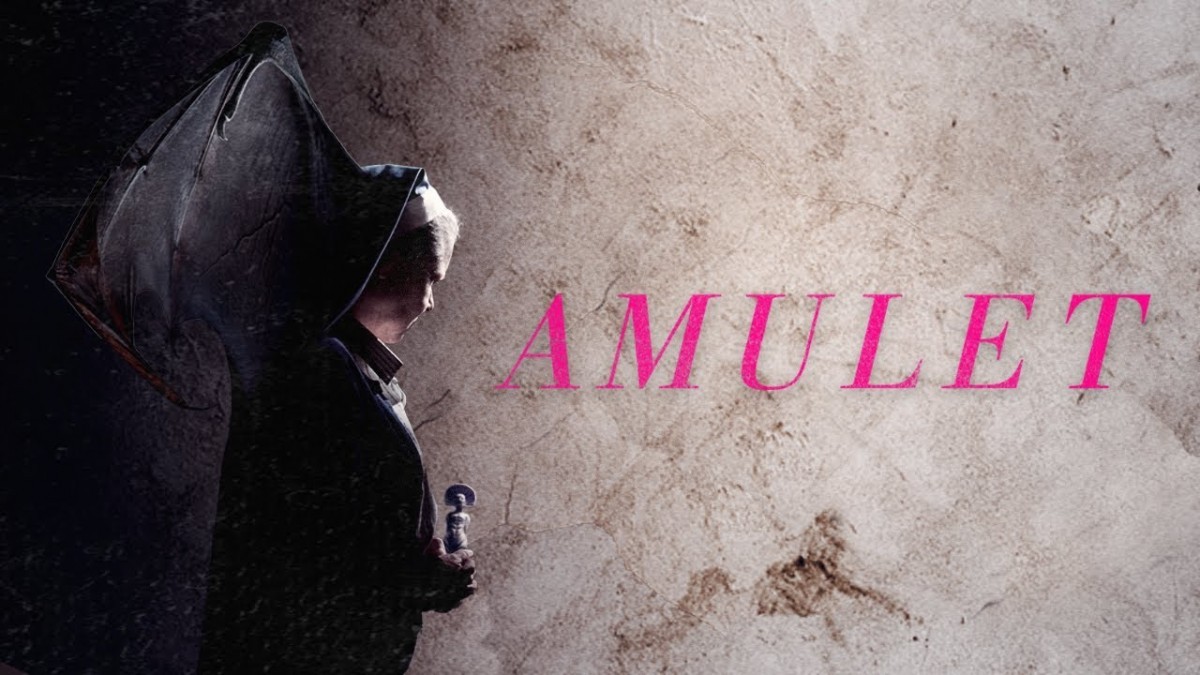 This was a movie that I heard about through podcasts. A few of them seemed to be seeing this and there were some mixed reviews for it. I was in the mood for a movie that might have some social commentary and this one seemed to fit the bill for me. To get into this, the synopsis is an ex-soldier, living homeless in London, is offered a place to stay at a decaying house inhabited by a young woman and her dying mother. As he starts to fall for her, he cannot ignore his suspicion that something sinister is going on.

For this movie, we’re following it in two different time periods. The earlier one is when Tomas (Alec Secareanu) is a soldier. He is tasked to man a gate that is in the middle of the woods. He is alone in doing so and this causes him to become lonely which in turn causes him to descend a bit into madness. He does what he can to create some normalcy for his life. One day he is digging in the woods and discovers a trinket. It looks like a woman with an odd thing behind her head, almost like a shell. He keeps this amulet. Not too long after a woman is running toward his post and she falls on her way. He isn’t supposed to let anyone pass and has his gun drawn. He ends up taking her back to his cabin to help nurse her back.

In what is our present, Tomas is homeless. Due to his nightmares at night, he has to tape his hands together. He is saving up his money by doing undocumented construction work. Things take a turn here when the place he’s staying burns down. He makes it out, but passes out in an alleyway. He is saved by a Sister Claire (Imelda Staunton). He wakes up in a hospital and then seeks her out afterwards. He declines any more of her help, just looking to recover his items. He learns that there was no money on him when she found him though. Being down, he agrees to go with her for help.

This brings him to the house where Magda (Carla Juri) lives. She is there with her mother who is sick and dying in the attic. The house is in disrepair so if he is willing to help fix it, she will cook for him and he will have a place to stay. He at first declines as he thinks that Magda doesn’t want to him to stay there. When he sees that she has a bite mark on her, he changes his mind.

Things are a bit rocky at first. He is trying to fix the toilet, but Magda stops him. The more time they spend together, the closer they become. He needs to face the demons from his past, as he feels he needs to be punished for it. Something happened between him and the woman he ‘saved’ while a soldier. There are also demons he needs to face within his house as he learns the truth of Magda, her mother and Sister Claire.

That is where I’m going to leave my recap of the movie, as I feel that gets you up to speed for me to shift over to what I thought about this. Where I want to start is this character of Tomas. We start seeing him in this post that looks extremely boring and taxing on the mind if you aren’t strong. The more we learn, the more interesting this becomes. Tomas is a philosophy student in college. He was given this post to due to his mother as it kept him from the front lines. Due to his loneliness, he did a horrific thing. He feels that he needs to be punished. It makes him susceptible to Sister Claire and what she is offering to help Magda and free her from her ‘mother’ as a way of redemption.

I think what I should go to next would be the amulet he finds in the woods. I don’t really understand why he was digging which causes him to find it. It just feels a bit convenient. I’m fine with that aspect of him discovering it though. That works for me. It really looks to be an artifact from a religion older than Christianity, which reminds me of things like The Exorcist. Since this movie then has him needing to be Christian with dealing with Sister Claire and what she is proposing, it makes the reveal something that ticks boxes for me.

What I didn’t necessarily care for though is that the movie is a slow-burn. We get a lot of cool imaginary and what not. My problem though is that I feel I needed a bit more explanation to things that we’re getting. The movie decides to stick with atmosphere and staying a bit vaguer. That can be a good thing, but I personally needed just a bit more for it to fully come together personally.

That is not to say that we don’t get some good aspects still. I think that the acting is solid across the board. Juri is good as this woman that is paying her penance for the ‘love’ and care that her ‘mother’ was giving to her. She tells us that her mother was once beautiful and could have left her at any time. Instead, she stayed and gave up her life to pretty much raise her. She is now forced to do the same. Secareanu is good with this character having the trouble past that he does. It makes him our hero and someone that we like at first. The more we learn though, the more it makes us change. Staunton is great for the role she is in as well. I do feel that the poster I saw does give some stuff away for her, but I’m not going to diminish her performance. I would also say the rest of the cast rounded this out for what was needed.

Next would be the effects. This movie does a bit lighter here until later in the movie. There are these creepy bat creatures we get to see a few times. Those looked to be done practical and I was on board for that. The blood in the movie looks good. We get some interesting visuals that make us question things that we’re seeing. Near the end, things go a bit wild and that is where I want just a bit more if I’m going to be honest. They look good and creepy. I have to give credit to the cinematography as well.

So now with that said I do feel that this movie has really good aspects to it. I enjoy the concepts that they are playing with here with religion and the potential of older entities that are powerful. The acting really helps to flesh out the characters to where they start, build and end up. I think the effects work well there, along with the cinematography and the creepy use of the soundtrack/sound design. If I have an issue, for the runtime we get I think a bit more could have been explained to get me completely on board. I still that this is an above average movie that is exploring some interesting ideas.