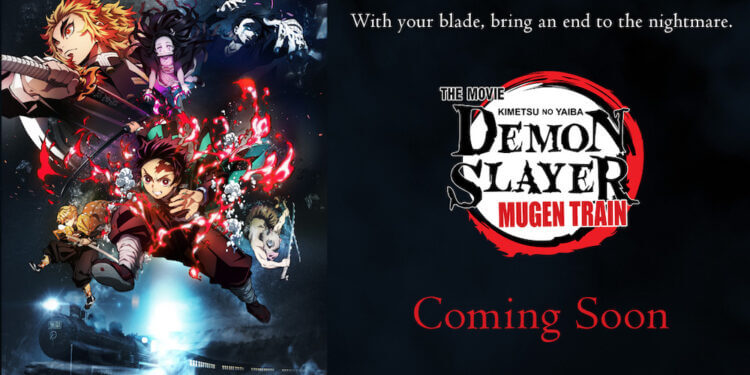 Demon Slayer -Kimetsu no Yaiba- The Movie: Mugen Train  celebrated yet another milestone with a phenomenal second week in theaters as the fastest film to achieve over $100M at the box offices in Japan after only ten days in theaters. The film premiered on October 16th on 403 screens (including 38 IMAX theaters) in Japan and currently holds the record with a total of 7,983,442 admissions and over $102.5M in box office sales in its second week.

Demon Slayer -Kimetsu no Yaiba- The Movie: Mugen Train  is a follow-up to the extremely popular TV series Demon Slayer: Kimetsu no Yaiba that premiered in April 2019 and was based on Koyoharu Gotoge’s comic, which boasts over 100 million copies in circulation in Japan. Featuring animation production from revered animation studio ufotable, the story follows Tanjiro Kamado’s journey as a demon slayer after his family is brutally murdered and his sister is turned into a demon. The film opens as Tanjiro and his comrades embark on a new mission aboard the Mugen Train, where over forty people have mysteriously disappeared in a short span of time.

Aniplex of America announced that Demon Slayer -Kimetsu no Yaiba- The Movie: Mugen Train  will be heading to U.S. and Canadian theaters in early 2021, to be distributed by Funimation Films.

About Demon Slayer -Kimetsu no Yaiba- The Movie: Mugen Train:
Tanjiro and the group have completed their rehabilitation training at the Butterfly Mansion, and they arrive at their next mission on the Mugen Train, where over forty people have disappeared in a very short span of time.

Tanjiro and Nezuko, along with Zenitsu and Inosuke, join one of the most powerful swordsmen of the Demon Slayer Corps, Flame Hashira Kyojuro Rengoku, to face the demon aboard the Mugen Train.