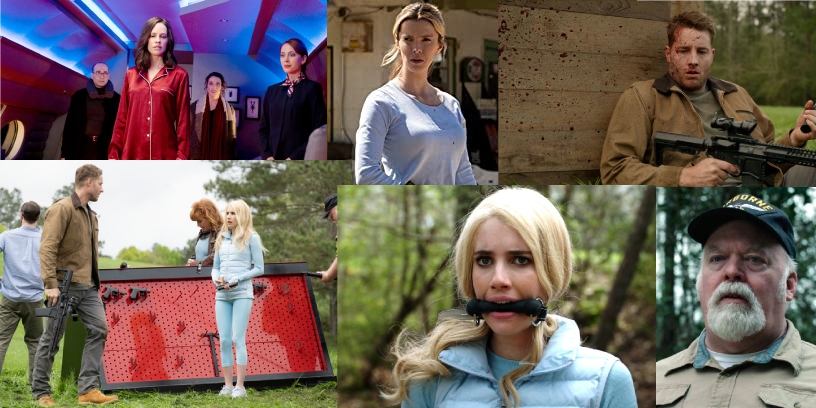 After some unfortunate violence in the real world, the film, THE HUNT (2020), was pulled from Blumhouse’s future releases.  It stayed in limbo for a bit, before reappearing on their theatrical release schedule for March 2020.  Unfortunately it was the very week that COVID-19 became the pandemic that it was, and as a result, the movie tanked at the box office.  Finally after an off and on release schedule on VOD, the film arrived to HBO Max where folks could finally take a look at the controversy behind the film and judge for themselves.

After a group of privileged elites discussing on text the murdering of so-called online “deplorables”, the conversation mistakenly is leaked and goes viral.  After their careers are ruined and all are cancelled, they decide to kidnap the Twitter trolls that brought them down.  The hostages are brought to a remote location where they must fight for their lives if they want to survive.

THE HUNT was directed by Craig Zobel (Z FOR ZACHARIAH (2015)) and written by Nick Cuse and Damon Lindelof.  In its ensemble cast, the stars include Betty Gilpin, Hillary Swank, Emma Roberts, and Amy Madigan.  Dark Discussions takes a look at this interesting film and are joined by actor Dan Lench (CIRCLE (2015)).