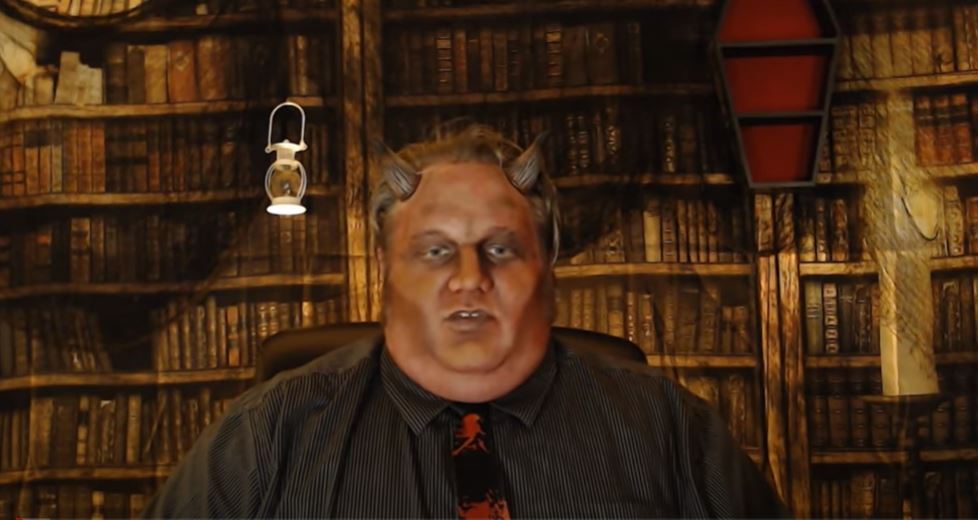 Barry the Movie Demon YouTube channel is devoted to the horror host personality by the same name created in 2019 by Travis Showman. Barry’s first ever appearance was in October 2019 at the Row House theater in Lawrenceville, PA hosting the film “Candyman” live for their “Row House of Horrors” movie weeks leading up to Halloween. Someone must have found his real name (you didn’t think a demon would really be named “Barry” do you?) and said it too many times in the bathroom mirror at the theater and POOF he’s there.

After Halloween was over Barry was still here in the mortal realm and got cleared to continue working remotely like many humans during the pandemic. His job in Hell is to watch every film made by humans and catalog the absolute worst of the worst to torture souls with later. Now he’s in management with his co-host, Chuckles the skeleton, working as his underling at the home office down below.

The two do a classic horror host show format called Hellish Horror Movie Nights with public domain films. You’ll be given an intro to the film and a few intermissions as well as a wrap up at the end, and throughout the film Barry and Chuck will appear and throw one liners out there for your amusement, Mystery Science Theater 3000 style. It’s classic horror meets comedy meets informative commentary.

Travis writes, films, stars in, and edits the entire show in addition to a regular 9 to 5 job. Episodes don’t come out weekly like a regular TV show would, but every few weeks an episode of the flagship show, Hellish Horror Movie Nights, makes its way onto YouTube. In between episodes Barry does cooking videos, movie reviews, and other content. The show hits its stride towards the end of the first season when he learned the editing skills to accomplish what was necessary, and season 2 features a much better set and lighting making the show look much more professional.