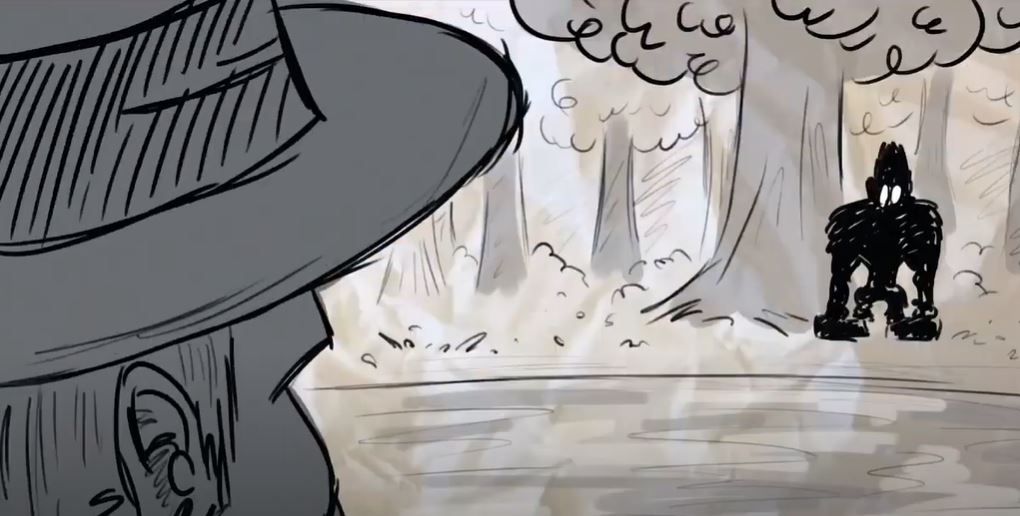 This was a movie that I need to give credit to Justin Cook. He reached out to me about checking this out as a screener, which I always love to help out independent cinema when I can. All I knew coming into this was a bit about the synopsis and that was it. I’ll keep this brief for the same reason. The synopsis is a mixed-up guy in the midst of a quarter-life crisis drags his big sister along on a Bigfoot-hunting expedition.

We start this off with a cartoon of a character meeting Bigfoot. It then shifts to our main character that is watching old footage/looking pictures of the most famous shot of this creature. His name is Cal (Jackson Trent). He then goes to visit his sister of Samantha (Anna Fagan) who is a college professor with her doctorate. From this interaction, we get that Cal is struggling a bit with life and wants to go on a trip to Ape Canyon to find Bigfoot. She doesn’t want to go, but he informs her he already bought their tickets with her credit card. This causes her to reluctantly join.

Also coming on this trip with them is a couple of Mark (Clayton Stocker Myers) and his new girlfriend of Gina (Lauren Shaye). There is a teen of Charlie (Donny Ness) who used his bar mitzvah money to come on this as well as the tour guide of Franklin (Skip Schwink). Mark seems like an outdoorsy type of person and Gina is excited. Charlie is reading a comic, but Cal sees a bit of himself in the boy and takes a liking.

The group goes out into the woods and starts their trek for Ape Canyon. They camp out for the night where Franklin tells the story of the first sighting of a Bigfoot which we get to see as another cartoon. The next morning, things take a turn when all of their money and wallets are gone along with Franklin. They have to decide to keep going or go back to town. No matter what is decided, Cal is bound and determined to get to Ape Canyon and nothing will stop him.

To shift away from my recap of the events of the movie, where I want to start is that I was bummed this isn’t a horror movie. I’m not going to hold it against the movie, but I started to get the inkling when I saw the genres attached. This really is a dramedy with the backdrop of this mythical creature. That’s not to say I disliked what we are getting here though, there is some really good heart in it.

I think where I should shift to first would be the character of Cal. Through interactions with Sam and other characters, we get the idea that he’s kind of a screw up. There have been multiple times in his life that he has made a mess of things, but it is almost expected of him now. There is an incident where Sam couldn’t handle things with their mother’s funeral and Cal stepped up. He got the wrong flowers though. His heart is in the right place, but attention to details isn’t there some times. What I found really interesting here is that he is married to Ally (Emily Classen). They also have a daughter. I found it interesting he’s so gung-ho about coming on this trip and even taking Sam from her family as well. The longer this goes on and the more bad things that happen to prevent it, we see that he’s covering up for something. There is some really good heart that comes from it and I can see where Cal is coming from.

Sam is interesting as well. She has her life together and wants to help Cal. Her husband calls her out that she can’t always be there for him. It takes time away from her family. Regardless, she is trying to, but he has an incessant drive to go to Ape Canyon which pulls her into some bad situations. It is interesting that he points out that she is obsessed with Herman Melville. It is wild that the day I finished reading Moby Dick was the day I watched this movie. Clearly, Cal is Ahab here. Cal is obsessively focused on getting to this location to find a Bigfoot, much like Ahab with finding this white whale. I knew from the moment this was introduced, it was going to correlate in some way. I’m glad that the writing did this for those that understand the reference.

Being that this is a comedy, we do get some pretty wild things that happen. I am forgiving there when realism might be thrown out the window at times. Trent has some solid comedic timing and the character of Cal actually has aspects to my humor. He really has rose tinted glasses to things that are being said or done around him, but he is staying positive. Despite when things aren’t working out, he tries to spin them and it really takes things to go bad or him being called out to break his mindset. This is also a front for that. I also think that Sam and Charlie add some levity with it.

Since I’ve already moved into this, the acting was good. I’ve already said I liked Trent as Cal. I think that Fagan also fits as Sam along with Ness as Charlie. Myers works as Mark and the reveal to the truth of his character was good. Shaye is a bit annoying, but that is the character she is taking on of Gina. Aside from that, I really like what they do with the character Darwin who is played by Bob Olin. He has a minor role, but it made me laugh with what they wrote in. Aside from that, Schwink and the rest rounded this out for what was needed.

Really then the last things to go into would be that I think the cinematography for this movie was well done. I do enjoy the isolated feel in the woods here and we get a lot of nature shots. It also is disorienting so I can see how they got lost at times, especially at night. Then I think the soundtrack was fine and they do some good things with the sound design as well. There are times that Cal hears things and being out in the woods, he thinks it is Bigfoot, which works.

In conclusion here, I think this is a solid little film. The concept of it is something that I could connect with or at least understand Cal and where he is coming from. I think that the character’s performances help to bring them to life. The setting works along with the soundtrack and design of the movie. This really is a movie that is worth a viewing in my opinion if you like dramedies. I’d say this is an above average movie for me.