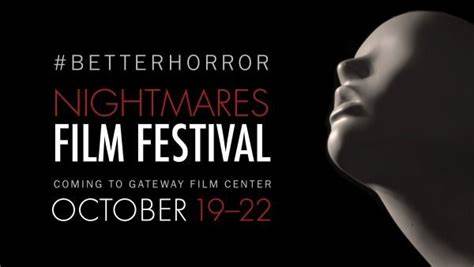 One of the greatest discoveries I made in moving back to Columbus, Ohio was discovering the Gateway Film Center. This little gem of a place is a non-profit that puts out some amazing independent, classic and new movies. A fun fact is that Sundance named it one of the best 20 art houses on the continent. Another great thing that it does for us horror fans is put on the Nightmares Film Festival. It started back in 2016 and I’ve attended the last three years. Through attending, I’ve had the opportunity to see such films as The Lodge, VFW, Daniel Isn’t Real, Swallow, The Laplace’s Demon and Ghost Killers vs. Bloody Mary. Due to the pandemic we’re currently living in, they had to do what many festivals are doing and that’s go online solely this year.

It was easier on the body for sure. Instead of the grueling three and half days of just solely watching movies, this time they started it Wednesday and allowing participants to watch on demand the movies all the way up until Sunday at 11:59 pm. There were two that had time specifications to request it, but even then, as long as you started it you had 24 hours to finish. This marks the first year that I’ve watched all of the movies that were offered. They break them into the categories of Horror Features, Thriller Features, Horror Comedy Features, Midnight Features, Documentary Features, Ohio Features and then they have blocks of short films that are Horror Comedy, Recurring Nightmares, Shut-in Shorts, Ohio Shorts and Stephen King’s Dollar Babies. They get so many submissions that most of the blocks are broken into two groups as well.

To start with the Horror Features, this section had Victim of Love, Climate of the Hunter, Black Bear and they’re usually good about getting at least 1 movie that is older so this year they showed the 4K restoration of The Legend of Boggy Creek. It looks like that the only premiere from this group was Victim of Love, getting its Ohio premiere. This is a movie from Denmark that also took home best Horror Feature from the festival. I personally enjoyed Black Bear the most which starred Aubrey Plaza.

For the Thriller Features, there were BAB, To Freddy, Goodbye Honey and Meander. Here we had the World premiere for BAB, North American for To Freddy and Meander as well as Ohio premiere for Goodbye Honey. To Freddy is an interesting movie from Norway with Meander from France. All of these are darker in nature, bordering on horror and I really enjoyed them all. To Freddy took home the best Thriller Feature from the festival. BAB was awarded Best Overall Feature and Best Cinematography. I personally felt that Meander was my favorite movie overall, which the director of Mathieu Turi received Best Director for a Feature. Juliette Gobin from Goodbye Honey got Best Lead Performance in a Feature as well.

Next up I’ll go to the Midnight Features. This had three movies of Duncan, Papi Ramirez vs. Giant Scorpions and Night Boat. These were all premieres of a sort with the World for Duncan, North American for Night Boat which came from Japan and Papi Ramirez vs. Giant Scorpions with its Ohio premiere. This last one is interesting is that it is filmed entirely on green-screen, winning it the best of festival. Duncan received the best Midnight Feature with Sakura Hinuma from Night Boat being awarded best Supporting Performance in a Feature. Of this group, Night Boat is an odd film that I really enjoyed it, but the best for me was Duncan.

The next category saw an interesting movie of Evil Takes Root. This fell into the Ohio Features as it was filmed around the area I live. This really feels like a mainstream movie that I wouldn’t be surprised to see in theaters in the near future. The pandemic might affect that, but I’ve seen some people I know having seen screeners of this. It did technically make its World premiere at Nightmares Film Festival.

Before closing this out, I wanted to highlight a few of the winners from the shorts categories and the winners of the screenplay competitions:

If you are a filmmaker or screenwriter and want to submit any of your works to this amazing genre festival, I will have the link below and from what I’ve heard, they are already open for submissions for next year. If you would like to attend next year’s, the website is a great resource as well!