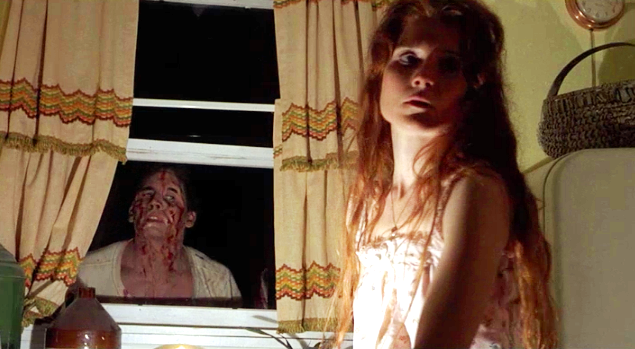 Welcome to another installment of Mother Nature Strikes Back — a swinging cinematic look back at a decade remembered for toxic waste and pollution, as well as the advent of the polyester leisure suit. It will be up to posterity to determine which of the two wounded us more deeply from a cultural standpoint.

On July 10, 1976, an industrial accident occurred in a small chemical manufacturing plant about 12 miles north of Milan, Italy in the Lombardi region, affecting the residents of Seveso and surrounding areas. This incident resulted in the highest-known ecological exposure of 2,3,7,8-tetrachlordodibenzo-p-dioxin. Within days, more than 3,300 local animals were dead or dying, and up to 70,000 residents could potentially suffer physical effects that might cause harm for generations to come. As of 2010, Time magazine still considers it to be the eighth largest man-made environmental disaster.

On July 30, 1976 a horror film is released destined to make even the early bird that’s slept in the longest quake from beak to tail — Squirm! This time, it’s you on that’s on the hook!

Questionably witty one-liners aside, Squirm is a solid horror film, and pretty entertaining to boot. Sure, Mike Nelson and the bots hilariously dissected it in season 10 of Mystery Science Theater 3000 — and you, a few friends and a couple of six packs can probably have about as much fun doing the same in the privacy of your own home.

Despite his starring role, Scardino is far more notable today as a producer and director, helming television shows like Law & Order, 30 Rock, Murphy Brown, 2 Broke Girls and an impressive resume of others. Pearcy did time in the 70s with a role in 1977’s The Goodbye Girl and the unfortunately named Cockfighter in 1974.

In addition to the method acting provided by many hundred thousand squiggling extras (sadly uncredited) the effects chair contained the posterior of none other than SFX demigod Rick Baker — known for Videodrome (1983), American Werewolf in London (1981), King Kong (1976), Planet of the Apes (2001), Ratboy (1986), The Funhouse (1981), It’s Alive! (1974), The Incredible Melting Man (1977) and more — each deserving of a viewing, and perhaps one or two for future inclusion in these very pages.

When the lights go down, the narrative beats you about the head with a raging thunderstorm and a truly disturbing title song atonally warbled by a child. We watch as the storm ravages the small town of Fly Creek, Georgia — along with some shots of local interest and culture. Cue the close-up of Willie’s Bait, where fresh worms are always on the menu!

An errant lightning strike knocks over a transmission tower and electrifies the ground beneath. The window of Willie’s ominously shatters, and a lone worm lets out a terrifying scream — or possibly a yawn — and all before the end of the opening credits. It’s clear we’re in for some serious invertebrate action!

The storm passes and the light of day illuminates the stately Sanders house. In true 1970s horror flick fashion, the whole she-bang starts out with a shower scene. This is sort of a good news/bad news situation. The good news is hey, shower scene. The bad news is that this is the last moment that anyone (or anything) in this film is ever clean again. The sets, actors and action spend the movie’s remainder covered in a generous layer of sweat, desperation and worm lubricant. It’s palpably hot, and frankly, we’ll all need a good scrubbing afterwards.

We’re introduced to the Sanders clan – Geri (Pearcy), her mother Naomi (Sullivan) and hip younger sister Alma (Higgins). We also get to meet Roger Grimes (Dow), the inbred heir apparent to the Willie’s Worm Farm empire. Roger’s finishing up some busy work in the garden, but it doesn’t take long for us to sus out that there’s something of a love triangle in play. Well, it’s more of a straight line, but you get the idea.

Geri’s antiquing friend Mick (A MAN!) has picked the worst possible time to head down to Fly Creek for a visit. A storm’s knocked out the power, it’s 114 degrees in the shade, and by nightfall half the freaking town is going to be worm food.

Meanwhile, Mick (Scardino) is on his way from the Big Apple to Fly Creek by Greyhound. The storm has flooded the only road into town, and the bus is blocked by a felled tree. He decides to get off and hoof it, and we can all tell he’s from New York City because he brought along a tennis racket! Silly urbanite.

Geri picks up Mick in the worm-mobile that she’s borrowed from Roger and heads into town for ice and provisions to ride things out until power is restored. It takes all of about three minutes for Mick to endear himself to the locals by getting all uppity in the greasy spoon and ordering an egg cream instead of a beer.

Once served, he’s promptly French kissed by one of these killer worms that’s found its way into his glass. Naturally, everyone thinks Mick had the worm in pocket the whole time, especially the law (Mac Lean) so clearly, New York here, well he’s a troublemaker. And things don’t get a whole lot better for our courageous young duo.

Throughout the film, worm-cleaned corpses seem to have a way of finding, and then strangely eluding Mick and Geri. Once reported to the local authorities, these remains go missing by the time the cops show up. It seems like the worms just might be smart enough to hide the evidence – a frightening thought.

At the same time, Mick and Roger get all alpha over Geri and the trio spend the day on the river fishing. Even for a beginner, it goes badly for Mick. Not only does he not have it in him to put a worm on a hook, he also gets mauled by the bait. He decides to call it a day and head back to the house.

An interesting subplot arises in classic 1970s fashion — when a handful of folks know the real deal about what’s really happening in Small Town USA — but if only the people would listen before they’re all messily devoured. Same old story. Mick and little sister Alma do some Scooby Doo-level sleuthing to kill some screen time and give the worms a well-deserved smoke break.

Geri and Roger paddle back out to the fishing spot, and now the worms are really pissed. They make a break for it and the pair are attacked – and frankly so blitzkrieged — by about 14 worms that they’re forced to split up to escape with their lives.

And then things start to get really weird.

If you’re going to make a horror film about killer worms, you clearly have your work cut out for you. And while there are more than a few sequences where about half a million wigglers spontaneously pop up from the ground out of nowhere, chew up some local teenagers into very small pieces and leave without a trace – Lieberman does manage to drum up some real menace. And in a clever way, too.

When a tree falls on (and through) the house during the world’s most uncomfortable dinner – believe me it’s a blessing – it provides the perfect worm highway that really lights up when the sun goes down. Once it’s dark – all bets are off, and the worm on worm action is hot and heavy.

The film’s climax pays off big with lots of dizzying and claustrophobic shots of fumbling around in the dark, a reprise of that bone-chilling opening song and the steady hum of what sounds like a Whirlpool washing machine filled with cheap ramen on the delicates cycle. People live and people die. Just another day in Worm City USA.

So if you’re looking for a proper polyester Mother Nature gone mad piece of 70s celluloid, by all means give Squirm a spin on your favorite device.

Until next time, don’t put that in your mouth, you don’t know where it’s been.